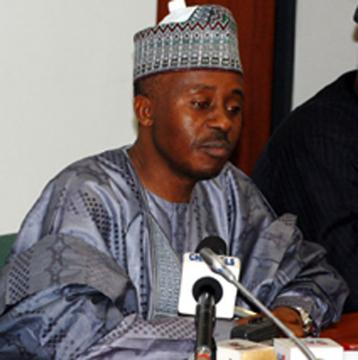 A High Court of the Federal Capital Territory (FCT) in Abuja, the Nigeria’s Federal Capital has sentenced a former member and chairman of House of Representatives ad-hoc committee on Petroleum Subsidy, Farouk Lawan to seven years in prison for receiving a $500,000 bribe from a businessman, Femi Otedola.
Justice Angela Otaluka convicted Lawan on the three-count charge on which he was tried by the Independent Corrupt Practices and other related offences Commission (ICPC).
The judge sentenced him to seven years’ imprisonment in respect of counts one and two, and five years on count three. The sentences are to run concurrently.
The Court ordered Lawan to return the $500,00 to the Federal Government.
Lawan had asked for the bribe with the aim of removing Otedola’s company, Zenon Petroleum and Gas Limited, from the list of companies indicted in the fuel subsidy scam in 2012.
After receiving the bribe, Lawan was said to have removed the name of Zenon Oil from the list of firms indicted by the ad hoc committee of the House