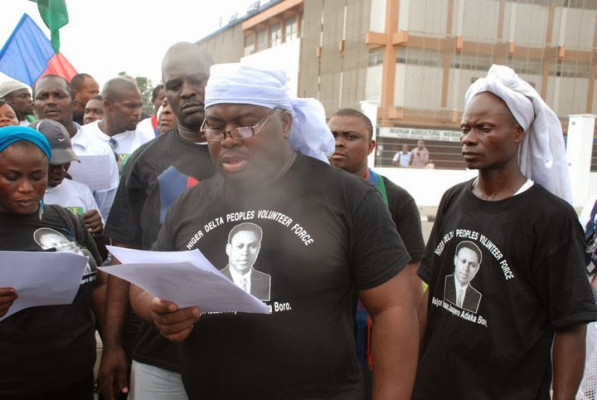 The national president, Niger Delta Peoples Volunteers Force (NDPVF), Alhaji Asari Dokubo, has vowed to retaliate the alleged stoning of President Goodluck Jonathan’s convoy when he visited Kastina state on Tuesday, describing the recent Peace Accord which all the stakeholders signed in Abuja as useless.

”For every action, there would be an opposite and equal reaction. I knew that the signing of the accord was useless and  the President subjected himself to sign such an accord, for me was out of place. The President and Commander-in-Chief of the Army forces of a country, but the president is an humble person, he does things that even surprise some of us and make us sometimes to be very angry.

Addressing journalists yesterday in Abuja, Asari Dokubo, who was reacting to the reports of stoning of President Jonathan when he visited Kastina on Tuesday, made it cleared that his group in Niger Delta would response proportionately.

“There is an establishment pattern of pre and post election violence in the North. In 50th when Awolowo was campaigning in the North he went with helicopter and he was mobbed. People said he was flying over their houses and peeping on their wives. That has continued and everywhere in the country, people would say leave them alone, we don’t want any trouble but the rule of the game has changed.

“To be very frank, on that day they were signing the accord I was very angry, signing with who? The president has sworn to protect the lives of every Nigerian, so why would he after taken a constitutional oath, subjected himself to another oath that would be stronger than the oath he took when he took office after been elected voluntarily by the people of Nigeria”

He said Buhari’s statements concerning peace accord was meant to deceive Nigerians, saying Nigerians should not believe him.

Speaking on what he think can bring about peace before and after the election, Dokubo said nothing will happen if the Northerners do not engineer violence, adding that anything contrary, he and his people will not fold their arms.

“The question is not for me, it for Buhari, Shakau and others who can not stop their people from stoning Jonathan when he visited Kastina”

On the called for the postponement of election, Dokubo said there is obvious fraudulent going on at INEC which said beyond ordinary man, suggesting that everyman should be allowed to vote without the Permanent Voters Card, because according to him, “INEC is not ready for this election.”

“We know there are going to do what they know how to do best after election, but my message to all the Igbo in the North is that they should all leave now, including all the corpers serving there, let them come back home because they will do it again after Jonatban must have been declared winner.”

He said a vote for Buhari at the coming election is a vote for retrogretion.

He said he had been working and getting good response from Nigerians that they will vote Jonathan, expressing confidence that President Jonathan will win with a landslide.

On corruption, Dokubo said people should not forget that Nigeria runs a federation system, asking how many people opposition political party have tried of corruption in their states even as they blame federal government always of corruption. [myad]