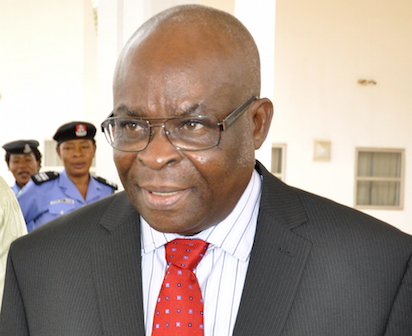 The Economic and Financial Crimes Commission (EFCC) has revealed the many lies which it said the suspended Chief Justice of Nigeria, Justice Walter Onnoghen told to cover up his lack of declaration of many of his assets.

The facts were contained in what was described as a “final address” which the lawyers to the anti graft agency sent to the Code of Conduct Tribunal, through a letter to the National Judicial Council (NJC).

In the letter signed by Ekele Iheanacho and Rotimi Oyedepo Iseoluwa, the EFCC catalogued various allegations against Justice Onnoghen, raising questions over the legitimacy of $1,716,000deposited, over time, into his domiciliary account at Standard Chartered Bank and monies found in other accounts.

“It is clear that these huge sums of money were not earned by the Respondent (Onnoghen) as his salaries and allowances”, the EFCC said in its submission.

The letter cited the transactions between a senior advocate of Nigeria, Joe Agi and Onnoghen, and the contradictory statements made by the duo over a Mercedes Benz 450 worth N7million bought for Onnoghen by Agi in 2009 and a $30,000 deposited into Onnoghen’s account by Agi.

Here is the full statement by the EFCC to NJC:

THE PETITIONER’S FINAL ADDRESS IN RESPECT OF PETITION ON FINANCIAL IMPROPRIETY, INFIDELITY TO THE CONSTITUTION AND OTHER ECONOMIC AND FINANCIAL CRIMES RELATED LAWS AGAINST HON. JUSTICE WALTER SAMUEL NKANU ONNOGHEN GCON.

My lords, by petition dated the 4th day of February, 2019 signed by the Ag. Executive Chairman, Economic and Financial Crimes Commission (hereinafter called, petitioner) to the Chairman, National Judicial Council, allegations of FINANCIAL IMPROPRIETY, INFIDELITY TO THE CONSTITUTION AND OTHER ECONOMIC AND FINANCIAL CRIMES RELATED LAWS were leveled against the Respondent. See exhibit P10.

My lords, at the hearing of this petition, the petitioner called 7 witnesses and tendered documentary evidence which were admitted and marked as shown in the table below:

8          LETTER FROM THE SUPREME COURT DATED 19TH FEBRUARY, 2019 TO EFCC WITH ATTACHED REGISTERED OF CASH SIGNED FOR AND RECEIVED BY THE RESPONDENT P8

It is also worthy of note that exhibits P17-P21 were tendered by the Respondent through PW7 Hary Erin, the Investigating Officer of the Petitioner.

My lords, the Respondent called the Acting Director of Finance and Account of the Supreme Court and also testified on his own behalf. In the course of his defence, the Respondent tendered documentary evidence through DW1 and himself. The exhibits are as shown in the table below:

We respectively submit that the sole issue for the determination of this Honourable Committee is whether in view of the evidence adduced by the Petitioner, it can be said that the Respondent has not breached the Code of conduct for Judicial Officers of the Federal Republic of Nigeria.

ARGUMENT ON THE ISSUE

My lords, it is our humble submission that from the evidence on record, it cannot be said that the Respondent has not breached the Code of Conducts for Judicial Officers. My lords by virtue of his appointment as a Judicial Officer, the Respondent has a duty to actively participate in establishing, maintaining, enforcing and observing a high standard of conduct that will ensure and preserve transparently the integrity of the Judiciary. The Respondent is also duty bond, in the performance of his duties to adhere and observe strictly the rules set out in the Code of conduct for Judicial Officer and failure to do so automatically constitutes misconduct. We humbly refer my lords to the Preamble to the Code of Conduct for Judicial