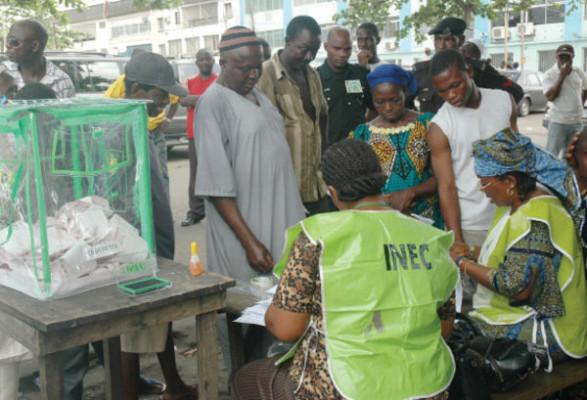 Suspected members of the dreaded Boko Haram today threw bomb at a polling station in the villages of Birnin Bolawa and Birnin Fulani in the Nafada district of Gombe state, killing at least two people.

The suspected Boko Haram members were said to have launched the attack just as voters queued up to be accredited for the election.

An election official, who requested anonymity, said: “We could hear the gunmen (Boko Haram) shouting, ‘didn’t we warn you about staying away from the election?'”

Meanwhile, Governor Adams Oshiomhole has described as shocking the reports that accredited INEC officials were restricted and stopped by some soldiers from conducting their lawful duties in parts of Edo North.

The Governor who noted that the soldiers must have got an illegal order from their Commander recalled how he had warned just yesterday that Brigadier Odidi has chosen to “frustrate this exercise in Edo North. Ironically, Brigadier Odidi is from Agenebode and he is the one who is giving this unlawful order.”

INEC officials who were taking election materials to Ward 10, Unit 1 in Iyamho, Etsako West Local Government Area were stopped by soldiers who had laid siege to the home town of Governor Adams Oshiomhole. The INEC officials told reporters that were forced to sit on the ground, alongside their police escort for several hours.

They were later allowed to leave after they got calls from their superiors. The soldiers said they were acting on strict orders from above.

Even journalists were not spared the soldiers’ ordeal as the INEC accreditation cards and reflective jackets were ignored while each reporter was asked to produce their company ID cards. The soldiers said the reporters were not permitted to monitor the exercise from one unit to another as they were only allowed to monitor a particular unit.

Miffed by the restriction of INEC officials, Oshiomhole continued, “Why the Nigerian Army will be used in this manner, only God knows. So I am surprised that they are restricting INEC Officers from distributing materials.

I have told the Brigade Commander and I am waiting to see what he is going to do but when you bear in mind that time is if the essence, if we finally go and beg the General to please allow democracy, time is gone.

First there is no light across the country so we are going to have everywhere in the dark. Under such situation, nobody knows what happens but I refuse to be frustrated and I appeal to our people not to be frustrated, we will sort things out.

“It is clear they have serious problem taking off. As you can see I am here and they say the card reader is not well programmed, it is not functioning and I got report from my Ward Headquarters that there are materials that are there and apparently the returning officers are trapped there because the soldiers  wouldn’t let them cross their barricade. From Apana the Ward Headquarters to this place, my voting centre takes about 10 minutes because of the good roads we have done.”

“I have complained to the soldiers here. I have also called the Brigade Commander to draw his attention to it. This one is completely incomprehensible because I do not know what the briefing of the Army is but what Professor Jega said is that in the event of a machine not working, they have spare to use and they have officers who would put them to work.

“Now if the Army is blocking INEC officials from moving, this is a new dimension that we have not heard of before and I thought the business of the Army is basically to check people who are carrying offensive weapons, I do not know if card reader is now an offensive weapon. I have complained to the Brigade Commander, Major General Olaleye and you have also heard me mentioning it to the Electoral Officer (E.O).

“My appeal; our people have a proverb that when you know that enemies are surrounding you, you do not go and rub yourself with an inflammable chemical such that when they just push you a little bit and you sit near fire, you get roasted.

“I have spoken to the INEC REC in Benin and I believe that Professor Jega the Chairman should be aware of what is going on in Edo where card readers are not working in many places.

“We have gotten reports from Benin and across the state and it appears the problem is rather widespread but it is my hope that INEC has sensible alternatives to invoke when we are in this kind of critical condition.

“I want to appeal to Nigerians, we have suffered enough. One more day of suffering will not kill us so let us exercise all the patience that we can, let’s refuse to be frustrated, let us not resort to a shouting match. By the Grace of God, God will not leave us hopeless.

“As leaders we must provide leadership role, more so at this hour. I have faith in democracy, it is not a choice, it is the only option. All of us have to be ready to sacrifice the day. I am very impressed seeing ordinary people queue up patiently to vote.

These are farmers who if they don’t work, they don’t earn. They are not like urban people who put pen to paper and steal money and earn even without working. If they sleep, their production will sleep. So they donate their production today for Nigeria’s democracy and this is what they get, but I am happy that they are not fighting.”

This is even as the Resident Electoral Commissioner (REC) in Jigawa State, Alhaji Halliru Aliyu Tambuwal has announced the suspension of the conduct of election into the eleven federal constituencies in the state as a result of dearth of voting materials.

The suspension, according to Tambuwal, became necessary because INEC, which was ready to conduct the presidential poll in the state, wants to rectify the problems before embarking on the exercise.

No new date has been fixed for the election. [myad]