Home NEWS CRIME How I Will Fight Corruption, Buhari Reveals: Says He’ll Lead From The... 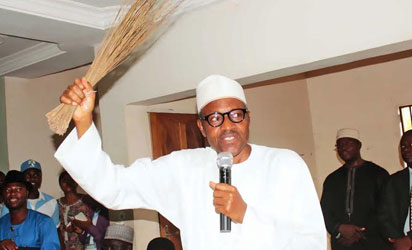 Presidential candidate of the All Progressives Congress (APC), General Muhammadu Buhari has come up with a blue-print on how he would confront corruption in Nigeria if he is elected in the March 28 election.
He said that he would start from himself by publicly declaring his assets and liabilities, and by leading the country from the point of view of security staying in front instead of remaining in the comfort of Aso Rock, the Presidential Villa.
Buhari made detailed sketches in this regard in a document which highlights what he will do in his first 100 days if he assumes power on May 29. The document is titled, “I pledge to Nigeria.”
He said: “I pledge to publicly declare my assets and liabilities encourage all my appointees to publicity declare their assets and liabilities as a pre-condition for appointment. All political appointees will only earn the salaries and allowances determined by the RMFAC.”
General Buhari also pledged to personally lead the war against corruption in the country, adding that he would inaugurate the National Council on Procurement as stipulated in the Procurement Act.
General Buhari said that all his political appointees would only earn salaries and allowances as prescribed by the Revenue and Mobilisation and Fiscal Allocation Commission (RMFAC), adding that he would encourage political appointees in his administration to also declare their assets publicly.
On the fight against insurgents, the APC flag bearer said: “I pledge, as Commander-in-Chief, to lead from the front and not behind in the comfort and security of Aso Rock, to boost the morale of fighting forces and the generality of all Nigerians.”
He said that he would also work with the National Assembly towards the immediate enactment of a Whistle Blower Act.
On the other ways to strengthen the anti-graft war, he said: “We will work with the National Assembly to strengthen the Independent Corruption Practices and other related Offences Commission (ICPC) and the Economic and Financial Crimes Commission (EFCC) by guaranteeing institutional autonomy, including financial and prosecutorial independence and security of tenure of officials.
“We will also make the Financial Intelligence Unit of the EFCC autonomous and operational; encourage proactive disclosure of information by government institutions in the spirit of the Freedom of Information Act.”
He also promised that his government would work with the leadership of the National Assembly and the judiciary to cut down the cost of governance, adding that the Federal Executive Council (FEC), which he said had been turned to a weekly session of contract bazaar, would be made to concentrate on its principal function of policy making.
On the fate of the kidnapped Chibok girls, General Buhari said that as a father, he had been feeling the pain of the victims of insurgency, kidnapping and violence whether “they are widows and orphans of the military, paramilitary, civilians and parents or the Chibok girls.
“My government shall act decisively on any actionable intelligence to #BringBack Our Girls.”
He made it clear that having had the rare privilege of serving the country in the military in various capacities and rose to the rank of a Major General and Commander -In -Chief of the Armed Forces, he would defend the integrity of the nation at personal and professional levels.
If the APC candidate keeps to his promise, he will be the second Nigeria’s President to publicly declare his assets.
The late President, Alhaji Umaru Yar’Adua, also from Katsina State as Buhari, was the first and the only Nigeria’s President to have publicly declared his assets when he assumed office.
This action forced his then Vice President, Dr. Goodluck Jonathan, to also make his assets declaration forms available to the public.
However, since he assumed office as the substantive President, Jonathan has refused to make the forms available to the public, saying that he did that when he was serving as Vice President to Yar’Adua.
Asked during one of the media chats whether he would consider declaring his assets publicity, President Jonathan refused, saying he did not give a damn. [myad]