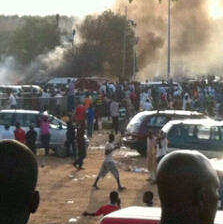 President Goodluck Jonathan has directed relevant agencies to work out urgent releif measures for the victims of twin bomb explosions in Jos, Capital of Plateau state today, even as he described the explosions as cruel and evil.
In a swift reaction to the. Blasts through his spokesman, Dr. Reuben Abati, President Jonathan condemned the act, saying that the perpetrators of what he called this tragic assault on human freedom are cruel and evil.
He directed all relevant agencies to mobilise support and relief efforts in aid of the victims.
The President extends his heartfelt sympathies to the affected families and persons even as he assured Nigerians that government remains fully committed to winning the war against terror.
“This administration will not be cowed by the atrocities of enemies of human progress and civilization.”
The President expressed Nigeria’s appreciation to the international community on the success of the recent Summit in Paris on the security situation in Nigeria hosted by the President of France, Francois Hollande.
He reaffirmed Nigeria’s commitment to the implementation of the resolutions reached by the Summit, in addition to existing measures already being taken by the administration to combat terrorism and ensure the safety of lives.
President Jonathan stated that the Federal Government of Nigeria is prepared to strengthen existing mechanisms to ensure the immediate implementation of the resolutions of The Summit, among which are:
‪
i. That every necessary measure should be taken to find the school girls abducted by
Boko Haram terrorists from Government Girls’ Secondary School, Chibok, Borno State on 14th April 2014;
ii. That Nigeria and other countries in the sub-region will continue to co-operate and coordinate efforts to combat the
Boko Haram menace.
iii. That the Heads of State have agreed that each country will contribute one battalion of troops to the international force set up to patrol the border areas, in line with the Resolution of the Lake Chad Basin Commission. France, United States of America and the United Kingdom will extend technical assistance to achieve this objective;
iv. That the countries will come together to put in place an effective border management regime;
v. That no effort will be spared to stop the proliferation of small arms and light weapons and the supply of arms and equipment made available to terrorists.
President Jonathan said that he considered these measures very useful aspects of the concerted international effort to combat terrorism and put an end to the Boko Haram menace.
“In addition, the President, in Abuja, today, directed relevant government agencies to ensure enhanced implementation of the following programmes in the areas affected by
Boko Haram atrocities:
(i) Emergency relief assistance:
The intensification of on-going relief assistance programmes by the National Emergency Management Agency (NEMA)) in partnership with donor agencies.
The programme will ensure rapid deployment of relief assistance to the affected local government areas and communities.
This will include provision of food supplies, medical supplies, basic relief commodities, and conditional cash transfer programmes for affected households;
(ii) Rapid needs assessment:
To support additional intervention programmes in the region, the President has also directed that on-going rapid needs assessment by government agencies should be accelerated to identify affected communities and households and assess the extent of damage to public and private infrastructure, amongst others.
(iii) Safety of schools: President Jonathan has also reiterated Nigeria’s determination to ensure the safety and security of schools in Borno and other parts of the country and also provide counseling services to any affected students to enable them return to school and continue with their academic work.
The federal government, President Jonathan said, has undertaken to rebuild the Chibok School and fortify security in schools, adding that in collaboration with the UN Secretary-General’s Envoy on Education, former British Prime Minister Gordon Brown and the private sector, the government will launch the “Safe Schools Initiative” which will address security issues; re-build the destroyed schools; and provide equipment and materials.