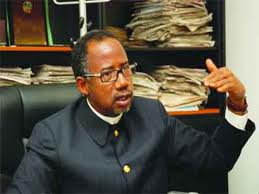 Minister of the Nigeria’s Federal Capital Territory (FCT), Senator Bala Mohammed is not happy with women who staged protests on Monday along the busy airport express way near Gosa Village in the capital city.

At an emergency meeting with chairmen of the six Area Councils and some local chiefs in the territory yesterday, the minister made it clear that the women were sponsored to embarrass the government, even as he sounded a warning that he would not tolerate any breakdown of law and order in the name of unlawful demonstration in the FCT.

Women had, on Monday morning, blocked the eight-lane express way at Gosa point, causing a huge traffic dreadlock. The women, who were half-naked, accused the government of plan to remove shanties and illegal structures in their villages.

“We will not fold our arms for any group to take the laws into their hands; we have tried to deepen community relations because Abuja is a national project, but disregard for law and order is unacceptable,” Bala said, and made it clear that the government would hold the local chiefs responsible for any breakdown of law and order in the territory.

“Sending our women on the street to demonstrate is mischievous and regrettable; they must not allow themselves to be used against the government.”

The minister said that no group of persons can prevent any arm of government from carrying out its statutory duties, saying: “the FCT Administration has records of all the natives as well as their buildings, which will not be removed until government has adequately compensated and resettled them.

“Any structure outside the already enumerated ones might not be spared, as they constitute security risk.”

He further warned the traditional rulers and village heads to desist from selling plots of land, as some of the structures being demolished by the FCTA fell into that category.