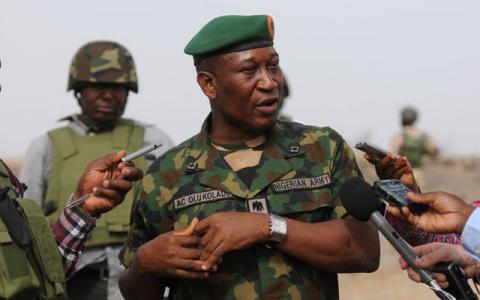 Nigeria Army is not only angry with an unknown soldier who alleged that some military officers are fighting on the side of Boko Haram in the North Eastern part of Nigeria, but that it is now investigating the person behind such allegation.
Reacting to the man who claimed to be a Nigerian soldier and who told Voice Of America (VOA) in an interview yesterday that some commanders in the Armed Forces are fighting on the side of Boko Haram, Director of Information in the Defence Headaches, Majeral General Chris Olukolade, said the faceless soldier is an impostor and that authorities are investigating him.
“We are still studying the interview to confirm the motive. At the moment, we suspect that the intention is to create wrong impressions and cause disaffection.
“A case of impersonation cannot also be ruled out. We are taking the information seriously despite the fallacies contained in it. We do not believe he is one of our soldiers.”
The unkonwn soldier had said that some Nigeria military commanders whom he did not name are now working with Boko Haram Islamist group.
He told the VOA Hausa Service that his military unit, based in Borno State, was once ambushed by Boko Haram fighters and that the commander of a nearby military unit, based in the town of Bama, sought the assistance of his unit in carrying out a raid.
According to the soldier, when the two military units joined up, they were given different uniforms. He said that the Bama unit commander gave his own troops green uniforms while his unit (the soldier’s) was given tan “desert camouflage” uniforms.
The soldier alleged that when the troops reached the battle area, the commander of the better-equipped Bama unit suddenly withdrew his forces, leaving the remaining troops to fend for themselves against Boko Haram fighters.
“We had only light arms and our men were being picked off one after the other.”
He added that he recognized some of the Boko Haram fighters as his former military trainers in Kontagora, a town in Niger State, near the Nigerian capital, Abuja.
“We realised that some of them were actually mercenaries from the Nigerian army… hired to fight us,” the man said.
The anchor of the programme in the Voice of America claimed to have made repeated but fruitless attempts to get reaction from the Nigerian government.
In a statement, Brigadier General Olukolade said: “Ordinarily, the Nigerian soldier is too disciplined to be involved in that kind of utterances on radio. Let no terrorist propagandists hide under the guise of not wanting to disclose their source to present impostors as representing Nigerian soldiers.
“We do not agree that he is our soldier; we believe very strongly that he is not our soldier.”

See also:  Nwaoboshi Graduates From Senate To Prison For 7 Years, Over Money Laundering