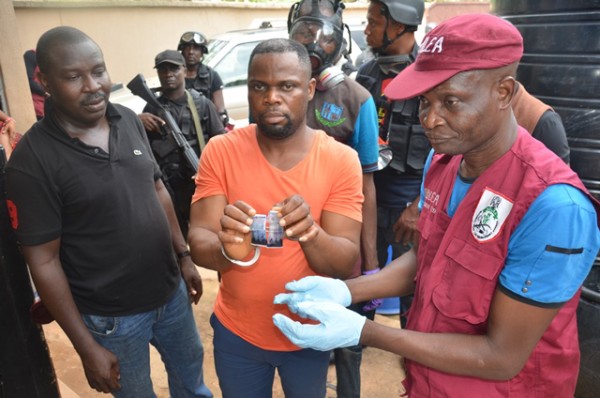 According to the NDLEA Chairman/Chief Executive, Ahmadu Giade, the illegal drug factories were discovered in Anambra State South East Nigeria, adding that Sylvester is found to be the owner of the laboratories and that he is also the leader of an International Drug Trafficking Organisation (DTO) that recruits and sponsors drug couriers to China, Malaysia, Turkey and Italy.

He said that there were sufficient evidences to nail the suspect, whose arrest he described as the latest outstanding operational success recorded by the Agency, adding: “the Special Enforcement Team (SET) of the NDLEA has concluded a model investigation of an International Drug Trafficking Organisation (DTO). The Agency apprehended the suspected leader of a drug syndicate in his country home at Ozubulu after thirteen months of intense surveillance. Three additional clandestine laboratories that produce methamphetamine had been discovered in his home town in Anambra State.”

Giade said that based on intelligence report received on April 23, 2014, a high level covert operation commenced on the suspect Mr. Chukwunwendu Sylvester Ikejiakwu aka Blessed of Ozubulu, Ekwusigo Local Government Area of Anambra State. “The 37 year old suspected drug kingpin was found to be deeply involved in Unlawful Exportation of illicit drugs, Unlawful Assembling as well as running of methamphetamine production laboratories in the Eastern part of Nigeria. He shuttles between his country home in Ozubulu, Nnewi and No. 2, St, James Close Ajao Estate Isolo Lagos where he resides in Lagos for his drug business.”

The Agency also discovered that Chukwunwendu Sylvester Ikejiakwu aka Blessed is the Group Managing Director of Blessed Group of Companies. He hides under the cover of motorcycle parts business in running a drug cell that has international affiliation. His companies include Blessed Benita Global Limited, Ideal Motorcycle Company Limited and God’s Special Enterprise Limited. He specializes in recruiting and sponsoring drug couriers to China, Malaysia, Turkey and Italy. He also pays his couriers an average of $5,000 dollars per trip.

He runs the clandestine methamphetamine laboratories in his premises located in Akubuezem Nnewi, Anambra State.

“During a search on one of the laboratories at his Nnewi house, 2.615kg of liquid methamphetamine was found inside a yellow plastic jug and 250grammes of crystallized methamphetamine concealed in a white transparent polythene bag. Methamphetamine laboratory equipment seized from his house include the following; One (1) approximate volume measuring scale, Six (6) heating filters, Six giant conical flasks, industrial tubes and cups of  sodium hydroxide. Others are containers of iodine, Acetone, Hydrochloric Acid, weighing scale, masks and hand gloves among others” the NDLEA boss added. 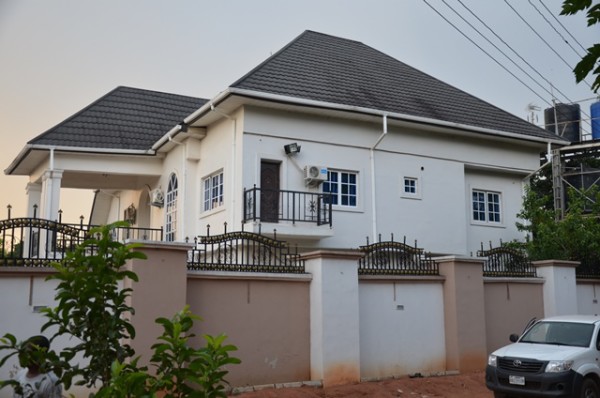 The House of Sylvester in Anambra

Also recovered from him are paraphernalia for drug concealment similar to the ones seized with drugs at the airports and land borders. They include an electronic weighing scale, assorted artifacts, laptop bags, motorcycle parts, air compressors, bus and truck mirrors, araldite and Atiso paint, processed brown envelopes and impulse sealer. Others are transparent packing nylon and carbon paper, tower foil paper, needles, threads, super glue and many more.

While surveillance on this criminal group was ongoing, the NDLEA intercepted 23kg of methamphetamine along Badagry expressway, Lagos en-route Cotonou. The seized drug was ultimately traced to Chukwunwendu Sylvester Ikejiakwu aka BLESSED. One AZUBIKE is now standing trial at the Federal High court Lagos in respect of that seizure. Some drug couriers sponsored by him have been arrested and are in prison custody in China, Turkey and Malaysia.

Some of the assets believed to be purchased with drug proceeds had been traced.

The illegal drug activities of the suspect have grave economic, social and political consequences on the nation. Methamphetamine production generates toxic waste that pollutes the environment and exposes workers, neighbours and guests to health hazards. Young and active youths are used as drug couriers to smuggle produced drugs outside the country. This is in addition to creating local drug addicts due to availability of the drugs at affordable cost.

Some of the drug couriers he sponsored are languishing in jail in China, Malaysia, Turkey and Italy.  Some are believed to have died in foreign prisons. Besides, Nigeria has suffered international embarrassment due to arrest of our nationals abroad

Notwithstanding the challenges, Giade said that the era of in-depth and analytical investigations have come to stay in the NDLEA. A solid foundation has been established and we shall continue to build on the existing structures. The Agency shall ensure that this case is diligently prosecuted and all assets traced to the suspect and his group is forfeited to the federal government.

He reassured members of the public that no drug baron shall go unpunished. At the most expedient time, more drug barons shall be exposed and prosecuted.  I wish to thank the officers that took part in the operation and urge them not to relent as every outstanding performance shall be rewarded. [myad]