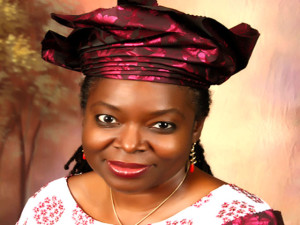 Minister of State for the Nigeria’s Federal Capital Territory (FCT), Oloye Olajumoke Akinjide has made it clear that Nigerian government has the will, the resources and the strategies to win the war against Boko Haram and terrorism in the country.
Speaking on behalf of the federal government to the women and youth who had staged a three-day protest against Boko Haram and terrorism at the Unity Fountain, Abuja to mark the 100 days of the abduction of over 200 girls from Government Secondary School, Chibok, Borno state, Olajumoke said that the government has procured new equipment and technology towards strengthening the capability and support for Nigerian military and security forces.
She added that a recent delivery of such military equipment include highly sophisticated fighter helicopters with in-built night vision technology.
She said that the government has a clear edge in weapons and reconnaissance capabilities, adding that the major breakthroughs recorded by the Nigerian Military in the war against Boko and terrorism have been numerous.
They include, according to her, the capturing of many senior Boko Haram commanders who were used as spies and treasury officials by the Nigerian military and security operatives.
She said that the achievements of the government also include the arrest of Sadiq Aminu Ogwuche, one of the masterminds of the April 14, 2014 bombing of Nyanya Bus Stop, located in an Abuja suburb, where several people were killed and others injured.
Ogwuche who was also accused of leading recruitment efforts of Boko Haram, was recently extradited from Sudan where he ran to and is now in Nigerian custody preparatory to facing prosecution later.
Olajumoke recalled that Boko Haram Chief of Intelligence was picked up and is now helping investigation while one Mohammed Zakari, a Boko Haram leader known as the ‘Chief Butcher’ was captured during the Nigerian Forces raid on Balmo forest, from where Boko Haram insurgents were expelled. [myad]