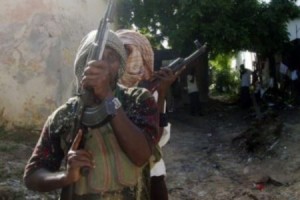 Parents of the Pupils of Vine International Academy school at Nyanya, the area that had witnessed two Boko Haram’s bomb blasts on April 14 and last week, beseiged the school to retrieve their children today as news filtered in that unknown gunmen attempted to abduct the pupils.
Information reaching us said that the gunmen trailed the school coasta bus that was conveying the pupils to the school and eventually took the bus from the driver.
It was gathered that the invaders drove the vehicle away from the school’s premises minutes after the pupils disembarked from it.
It was gathered however that none of the pupils or members of staff was hurt, but the gunmen went away with the school bus.
An official of the school who would not want his name mentioned said that it was not immediately known if the gunmen were members of Boko Haram or if they are robbers.
“The sad thing is that parents do not want to know if it is Boko Haram or not. Many of them are coming to take away their children out of panic.”
Residents of Nyanya are now living in fear of further attacks.
Meanwhile, eight other girls were said to have been abducted by unknown gunmen in a place near Gwoza in Borno state yesterday.
The girls, said to be between the ages of 12 to 15 were abducted in Warabe village of Gwoza Local government area of Borno state.
The gunmen were said to have also carted away foodstuff and livestocks belonging to the villagers before fleeing into the bush.
Gwoza is about 160 kilometres from Maiduguri, the state capital.
A resident of Warabe village, Mallam Bello Umar said that he was a resident of the village before he ran and settled in Gwoza following the increasing cases of Boko Haram  attacks in Warabe and other neighbouring villages  in Gwoza council area.
” A group of terrorists invaded Warabe village on Sunday night, abducted 8 of our teenage girls before carting away our foodstuffs and livestock.
“As I am talking to you now, I have ran to Gwoza council headquarters, and even in Gwoza, we are restricted around the council secretariat due to the fear of the terrorists. The situation is so pathetic as almost all Gwoza people, including villagers who came for safety are only restricted in a safer zone close to the council secretariat where there is enough presence of security personnel.”