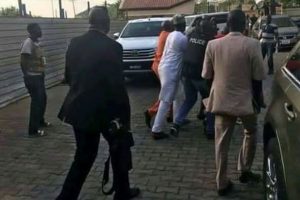 Report reaching us said that the Senator submitted himself to the police outside his Maitama, Abuja, home in the evening of today, Monday, following appeals from some of his colleagues at the Senate.

According to his media aide, Gideon Ayodele, he has been taken to the special anti-robbery squad office in Guzape, Abuja..

Ayodele said that the police planned to take Senator Melaye to Kogi to face murder charge, in addition to the current criminal investigation being carried out on him by the police.

“They (police) told us they wanted to take him to court here in Abuja, but they diverted towards Kogi now. But he has said he will not go to Kogi and there is currently a stalemate over that.”

Ayodele said that taking his principal to Kogi would be illegal because the Abuja Division of the Federal High Court had recently ruled that his case should be transferred to Abuja.