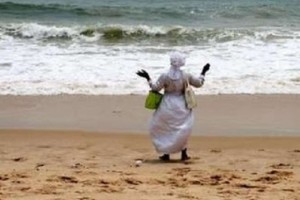 A self-made prophetess, Linda Mabi-Praise has been charged to an Ikeja, Lagos Special Offences Court, accused of swindling a company to the tune of N1 billion.

Linda Mabi-Praise of Temple of Praise Church located at off Adeniran Ogunsanya St., Surulere, Lagos, was said to have committed the offences in 2017 in Lagos along with her company, Mutano Energy Ltd.

The Prosecutor for the Economic and Financial Crime Commission (EFCC), Frank Ofoma told the court that the accused person received N503.3 million in five tranches from the complainant, Tophara Ventures Nigeria Ltd and subsequently issued three dude cheques to the company.

“On April 4, 2017, the defendants fraudulently obtained the sum of N80 million from Tophara Ventures Nigeria Ltd by falsely representing to the company that the money was for costs of diesel importation.

“On April 24, 2017 the defendants falsely obtained N238.2 million from the complainant by claiming that the funds were for the purpose of diesel trade and supply.

“On April 24, 2017, the defendants dishonestly stole and converted N137.1million from the complainant and sometime in 2017, she also stole N48 million from Tophara Ventures Nigeria Ltd.”

The prosecution said that the prophetess with intent to defraud, had on May 3, 2017, issued three dude United Bank for Africa (UBA) Plc cheques to Tophara Ventures.

“All three cheques were dishonoured on presentation for payments on the grounds were standing in credit in Mabi-Praise’s bank account,” the EFCC prosecutor said.

The offence also contravened the provisions of Section 1(1) of the Dishonoured Cheques and Other Related Offences Act 2004.

The judge, Justice Sherifat Solebo, gave order for the remand of Mabi-Praise in Kirikir female prison pending when she would perfect her bail conditions, even as the accused person pleaded not guilty to an eight-count charge of stealing, obtaining money by false pretence and issuing dud cheques.

Justice Solebo had earlier admitted the defendant to bail in the sum of N25 million with two sureties in like sum.

She ordered that the sureties must be resident in Lagos, provide proof of residency and proof of payment of tax.

The judge then adjourned the case to March 25 for trial.