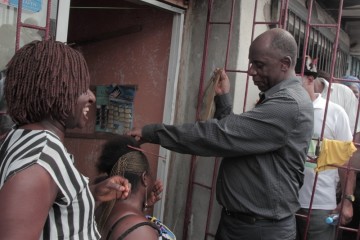 Political campaign is getting bloody in Rivers State as people suspected to be political thugs shot at Governor Rotimi Amaechi of the state when he went to campaign in Obio/Akpor Local Government Area of the state. Obio/Akpor is the home of the PDP governorship candidate in the state, Nyesom Wike.

Two members of the All Progressives Congress (APC) were said to have been seriously injured during the incident, which happened at about 6pm today as the governor embarked on a door-to-door ward campaign in the area.

Eye witness accounts said that the thugs also set bonfire along the road to prevent the governor from leaving, adding that the thugs suspected to be working for the Peoples Democratic Party (PDP) in the state, threw bottles, stones and other dangerous objects at the Governor Amaechi and his entourage.

It was learnt that when the governor was leaving the community, bonfire was set up on the road to prevent him from leaving even as more gunshots were fired at his convoy.

Meanwhile, the Greater Together Campaign Organisation, a team in charge of Dakuku Peterside’s governorship campaign, described the attack on the state governor as part of the plan to assassinate chieftains and members of the APC. [myad]