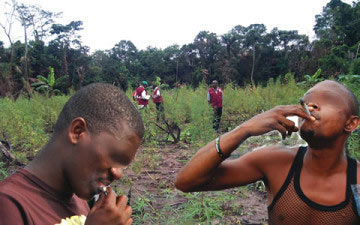 Security outfits in Nigeria have reached a consensus that the increase in the level of hard drugs in circulation is the major cause of terrorism, kidnapping, banditry and other criminal activities that have refused to abate.
“If you look at the criminality, the colouration of each crime, especially kidnapping, banditry and terrorism, it is not the killing of the people but the way people are killed, goes to show one thing. It is extremely abnormal, inhuman and these acts can only be perpetrated by people who are out of their minds.
“One thing we in the security and intelligence arm have been able to trace, is that there are certain drugs of choice that have saturated the entire landscape of the country.”
They identified such drugs as condone, opiums, cocaine, tramadol and pertamines and cannabis sativa.
Speaking to newsmen today, August 4, shortly after a  security council meeting, presided over by President Muhammadu Buhari, at the presidential villa, Abuja, the National Security Adviser (NSA), Rtd General Babagana Monguno, said that the service chiefs were of the opinion that widespread use of these substances had dangerous impact on the social and economic situation of the country.
According to the National Security Adviser, the popular drug of choice, tramadol, is easily acquired and that it  has been the drug of choice for terrorists, bandits and kidnappers.
“I, the chief of Defence staff, Army Chief, Inspector General of police, Heads of the various intelligence agencies gave synopsis each of the current security situation and what our various organizations and agencies are doing about the security situations.”
He stressed that the drug trafficking and abuse of drugs, has taken on a worrisome dimension, adding that Nigeria’s perception on the drug trafficking index has changed from the status of a transit hub to a production center.
“Between 2011 and 2019, approximately 17 manufacturing laboratories of metal and metulin substances were located by the various security agencies and destroyed. That is a large number. At the same time, we have had increasing activities of illegal cultivators of Canabis in Nigeria.
“These people basically use extremely large space of arable land to cultivate this illegal substance, employing militia men to protect their farms and also their storage facilities.
“When you look at drugs, our main concern as security operatives, is the ultimate destruction to the social fabric and economy of the nation.
“There is hardly any violence crime today in Nigeria that is not propelled by the use of these hard substances. And these hard substances have been coming in from all nooks and crannies. What is worrisome is that the report we have received from the chairman National Drug Law Enforcement Agency (NDLEA), show that the number keeps increasing. Despite the closure of borders, we are still having to contend with the influx of these drugs.”
The Security Adviser warned that unless there is a collective and concerted effort to deal with with this problem, it will result in this country going down the bottomless pit of self destruction.
“We don’t want that to happen and one of the ways of dealing with this issue is by using a whole of society approach in conjunction with the whole of government approach to achieve the whole of the nation approach.
“You have a minimum of three parties operating at the same time: the drug peddler (the supper fly), the consumer (the junkie) and that person in the center who has been entrusted with denying these drugs access  into the country. It is important to note that if there is a compromise then things become tedious and problematic.