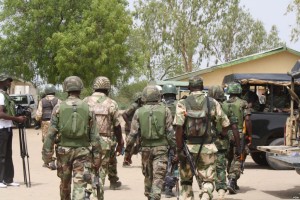 Nigerian military, fighting under the banner of Special Task Force in the north-central part of the country have raided camps and criminal hideouts located in Bukuru, Jos South and Barkin Ladi general areas.
Information from the armed forced today said that the raids had led to the  arrest of 23 members of armed gangs terrorizing the region.
It said that the suspects were made up of criminals and a hard drugs supplier who are currently undergoing preliminary investigation before they will be handed over to appropriate prosecuting agency.