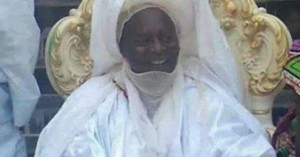 The Director, Defence Information of the Nigerian Army, Major General Chris Olikolade has assured that the troops fighting Boko Haram have swung into action to apprehend members of Boko Haran that killed the Emir of Gwoza in Borno state, Alhaji Idrissa Timta in the early hours of Friday.
Olukolade said in a statement in Abuja that troops are currently on aggressive patrols along the entire route with a view to apprehending the perpetrators and keeping the area safe.
He admitted that the emir was killed when a band of terrorists attacked the vehicle in which he and Emir of Askira, Alhaji Abdullahi Ibn Muhammadu Askirama and Emir of Uba, Alhaji Ali Ibn Ismaila Mamza were travelling to Biu to pick the Emir of Biu so they could all drive in convoy to Gombe ‎State to attend the funeral of the late Emir of Gombe who is scheduled for burial in Gombe on Friday.
“Troops deployed in Garkida responded to the attack. The Emirs of Uba and Askira were secured while the body of Emir of Gwoza who died in the attack has been recovered.
This is even as the Borno state government also announced the murder of the Emir, whom the government described as one of the pillars of peace in the state.
A statement by Secretary to the State Government, Ambassador Baba Ahmed Jidda also described the murdered Emir as a great man who worked very hard to promote peace and progress in Gwoza.
“He was a pillar and one of the rallying points in Borno State. He visibly worked very hard in the search for peace in Gwoza since the insurgency began.”
He said that the State government is terribly shocked by this incident, adding that the government prays that Allah admits the late Emir into aljanna Firadaus and give family, members of the Gwoza Emirate Council, ‎the people of Gwoza, the State Council of Chiefs and the entire people of Borno State the fortitude to bear this very traumatic loss.
He regretted that this incidence happened at a time the State is still dealing with equally disturbing issues related with security challenges.