Home NEWS CRIME We Were Like Slaves In Bush: Not Eating Good Food, Not Bathing... 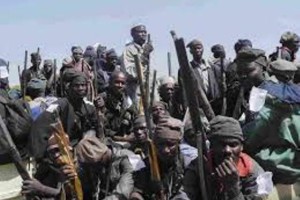 Repentant Boko Haram fighter who has just surrendered to counterinsurgency troops in Borno State has spoken of how he and others lived in the bush like slaves with no good food to eat, no water to bath and were virtually suffering.
The suspect, who is current undergoing profiling at a Nigerian Army facility in Borno State, said that he was fooled into joining the terror organisation, adding that the terrorists used religion, intimidation and threats to recruit members.
The suspect (name withheld for security reasons) described life in the bush as hell.
He confessed that they would have surrendered a long time ago but that they were afraid of being killed by soldiers, forcing them to remain with the terrorists.
‘I joined the terrorist group six years ago and have remained in the bush as a slave because you don’t have your freedom.
‘I would have surrendered a long time ago along ago but I was afraid that if I come out of the bush the soldiers would kill so I had to still remain with the terrorists.
“I realised that I was being misled, misinformed into fighting and taking arms and I am happy with the way I have been received and I am appealing to other terrorists to drop their arms and above mbrace peace and they would not be killed. I have a wife and I came out with her.
‘I came out with my guns which I surrenders to the soldiers.
‘I suffered in the bush our commanders misled us that we were fighting a just cause and we hardly eat good food when I surrendered the civilian JTF that I first met did not harm me. Many of my colleagues who are still in the bush are willing to come out. If I had their phone numbers off heart I would have called to assure them to come out,’ he told reporters who were on tour of the counterinsurgency operations in the North East with the Director army public relations in Borno State.”
Source: Daily Sun.