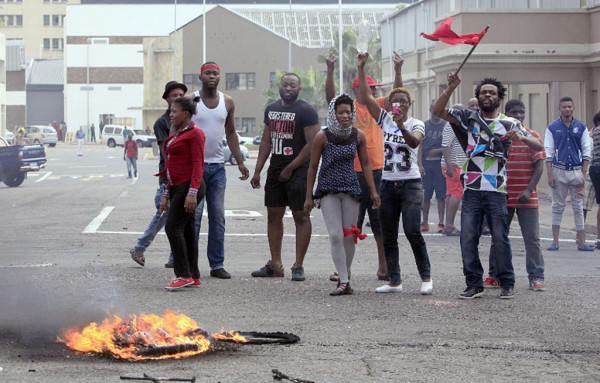 Zimbabweans are set to start attacking all citizens of South Africa living in Zimbabwe in retaliation for the indiscriminate attacks currently being waged on immigrants by South Africans in South Africa.

The president of Zimbabwe National Students Union (Zinasu), Gilbert Mutubuki has already made a call to Zimbabwean youths to start revenging xenophobic violent attacks by attacking individual South Africans operating in Zimbabwe as well as their businesses.

Zinasu is Zimbabwe’s largest students’ body which represents thousands of students at all universities and colleges across the country.

At least, five people have been killed – including a teenager – and 46 people have been arrested since the violence flared in Isipingo, outside Durban on Friday in South Africa. About 7 000 people of different nationalities are living in tents provided by the provincial government for those displaced by the violence.

Addressing journalists in Harare after an anti-xenophobia demonstration organised by Zimbabwe civic society groups at the South African Embassy, Mutubuki said it was high time the country’s youths retaliated by attacking South African businesses operating in Zimbabwe such as Pick n Pay and others.

Mutubuki’s call came after over 300 Zimbabwe human rights and civic society activists demonstrated at the South African embassy located in the Belgravia area in Harare this morning.

The protesters were denouncing King Goodwill Zwelithini and President Jacob Zuma son Edward, accusing the two of sparking the xenophobic violence in South Africa. There were also waving placards inscribed with messages like “South Africa is not island and should stop this nonsense” and “Stop it, South Africa”, “Africa is home to all” among others.

The demonstrators also handed over a petition to South African Embassy officials.

The protesters were later dispersed by heavily armed Zimbabwe police.

Some of the South African businesses operating in Zimbabwe include Pick n Pay, Edgars and Standard Bank among others.

South Africa, with a population of about 50 million, is home to an estimated five million immigrants. Over one million Zimbabweans are believed to be living in South Africa as economic or political refugees. [myad]