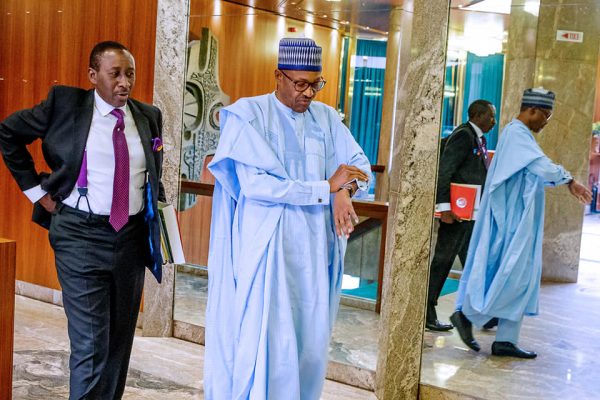 The Coalition of United Political Parties (CUPP) and the Action Peoples Party (APP) asked an Abuja Federal High Court to compel President Muhammadu Buhari to sack all his political appointees who are yet to be re-appointed.

The plaintiff described as an aberration, for the presidential aides whose tenure ended with the expiration of the president’s first term, to continue in office without being re-appointed.

Those sued as defendants in the suit marked: FHC/ABJ/CS/762/2019, include; President Buhari, Abba Kyari, Boss Mustapha, Garba Shehu and Femi Adesina, as 1st to 5th defendants.

The plaintiffs want an order of the court to restrain Kyari, Mustapha, Shehu, Adesina (2nd to 5th defendants) and any other personal staff of the president, from parading themselves as the Chief of Staff, SGF and media aides to the president of the Federal Republic of Nigeria, until official reappointment is made.

They also prayed the court to order the defendants and other aide or personal staff of the president appointed prior to May 29, 2019 and still acting in that capacity without reappointment, to return and pay into federation account, all their emoluments, salaries and allowances received from May 29, 2019 till the day they vacate office.

The plaintiffs, in the suit filed on July 3, 2019 by their counsel, Chibuzor Ezike formulated three questions for the determination of the court, one of which is, “Whether by Sections 151(3), 152 and 171(1)(2)(a and e) and (6) of the constitution of the Federal Republic of Nigeria 1999 as amended, the first defendant (Buhari) has the power to extend and elongate the tenure of the office of the 2nd to 5th defendants and any of his aides appointed pursuant to Sections 151(1) and 171 (2) (a and e) of the constitution without first terminating their tenure at the end of his four year term on the 29th, May, 2019?

See also:  Things that Held Nigeria Back Will Soon Be put Behind - Tinubu

“Whether the tenure elongation and continued service of the 2nd to 5th defendants and all other aides of the first defendant, despite the expiration of the President’s four year tenure on May 29, without official reappointment taken and subscription of oath of office and oath of allegiance is not in clear breach of Section 151(3) 171 (6) of the constitution of the federal republic of Nigeria 1999 as amended?

“Whether the 2nd to 5th defendants or any other aide of the president appointed pursuant to Section 151 and 171(2)(a and e) are entitled to any official emoluments and benefit with respect to their offices as from May 29, 2019, when the first four year tenure of the president ended?”

“These among other officials of the presidency are still illegally occupying their former offices without any lawful authority as the president have not made any announcement to the nation that he has appointed or reappointment officers onto the positions,” it said.

According to CUPP, “President Buhari’s inability to appoint personal/presidential aides or indeed any other appointments over one month after taking oath of office is a sign that the president is still not yet ready to govern and lacks understanding of the urgency needed to fix Nigeria.”