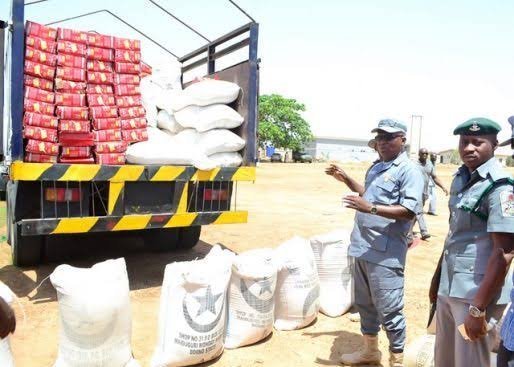 The Nigeria Customs Service (NCS) has announced that it impounded contraband goods with Duty Paid Value (DPV) worth N13.9 billion in 2022.

This is even as the Service said that it recovered about N878.3 million from goods cleared from the seaports and border stations with under payment of accruable duty.

The Customs Area Controller of the Federal Operations Unit, Hussein Kehinde Ejibunu, who made these known at a news briefing in Lagos, said that the Unit lost four of its officers in the course of fighting smugglers in the out gone year, adding that the Unit arrested 176 suspects during the period under review.

“In terms of volume, rice topped the list of our seizures. We seized 93,102 X 50 kilograms which amounts to about 156 trailer loads of rice. Even our newly constructed warehouse had an overflow of seized rice. A total number of 108 automobiles comprising of trucks, tankers, cars and motorcycles were seized either as smuggled items or means of conveyance of smuggled items. Illicit drugs seized within the year under review are, 7,354 kilograms and 4,975 tablets of Cannabis sativa, 233 cartons X 225 milligrams, and 82 packs X 225 milligrams of Tramadol.

“It is pertinent to remind us that these hard drugs fuel crime and insecurity. For petroleum products, this Unit seized 656,414 liters of Premium Motor Spirit (PMS); that is, about 20 tanker loads of fuel from economic saboteurs who seek to impoverish the majority of our country people by taking out petrol subsidised for citizens’ benefit to be sold in other countries.

“We arrested 176 smuggling suspects last year, secured 7 convictions, 14 were charged to court and are at various stages of investigation and prosecution, 7 suspects are in detention: 2 suspects were handed over to NDLEA, and 1 suspects was handed over to the Nigerian Police respectively, while 151 are on administrative bail.

“On a sad note, four of our officers namely: Late inspectors of Customs TP Astor, and A Onwueguzie, and Assistant Inspectors of Customs, Musa, R and Bristol, E lost their lives in active service while confronting smugglers last year.  While we frowned at such murderous acts, we also ensured that those behind some of the killings were arrested to face justice. As approved by our enabling laws, the Unit patrolled within its area of responsibility and ensured that smuggled items were uncovered and seized wherever they were hidden.”