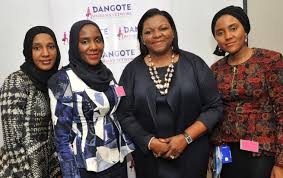 The Dangote Women Network (DWN), over the weekend, raised over N20 million at charity walk aimed at creating awareness on the plight of Internally Displaced Persons (IDPs) that are affected by insurgency in the Northeast. The charity walk, led by the President/Chief Executive of Dangote Group, Alhaji Aliko Dangote and other senior executives, drew participation from over five hundred women across Nigeria.
Speaking at the event, the Executive Director, Dangote Flour, and chief driver of the charity walk, Halima Dangote, expressed sadness at the deplorable living conditions of IDPs and called for help from well-meaning Nigerians to ameliorate pains and sufferings of the victims who have suffered untold hardship.
Halima Dangote mentioned the various intervention initiatives by Dangote Foundation which is in excess of N5 billion and appealed for Nigerians to do more to bring lasting relief to IDPs, especially women and children.
She commended Dangote women for their unwavering support, commitment, sacrifice and financial contribution made to IDPs through the initiative.
“I would like to take this opportunity to thank our women for their donations and contribution towards making the charity walk a success.”
She further appealed to all public spirited individuals and organizations to rise up to be counted at this time of hardship for the IDPs.
The funds raised will be used to provide mosquito repellant blankets, food items and warm clothing for the IDP as harmattan is approaching.
The President of the Dangote Group, Aliko applauded the initiative of the women group, even as he stressed the significance of giving back. “Giving back is the key to success.”
He added that no humanitarian assistance is too small to render to the people in need.
“I therefore encourage you to give back, and that gesture would never be in vain.”
He also pledged his full support to the women’s network, and encourage them to do more.
In her closing remark, the CEO of the Foundation, Ms Zouera Youssoufou said that the foundation is ready to contribute to peace and security in all parts of Nigeria describing the gesture as a huge success which would go a long way in touching the lives of many. [myad]