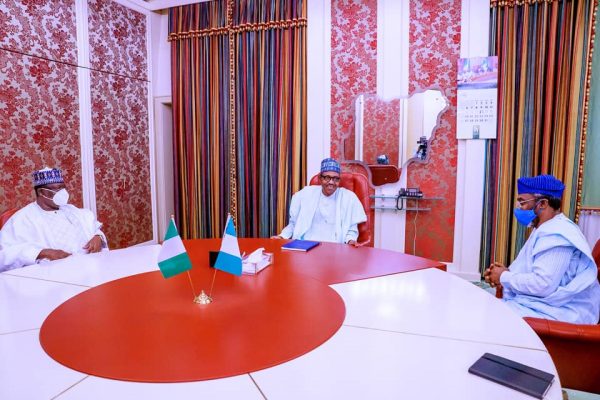 Bother President Muhammadu Buhari and Senate President, Ahmed Ibrahim Lawan, have cautioned ministers and other appointees of the President against causing unnecessary frictions between the executive and the legislature.

The two leaders, who met today, July 16, for about an hour at the Presidential Villa, Abuja, vowed to maintain the good working relation they have established immediately they assumed their functions last year.

He said that Ministers and all heads of Departments and Agencies should at all times conduct themselves in ways that will not undermine the National Assembly as an institution, its leadership and members.

The President and the leaders of the National Assembly recognized and acknowledged that the Executive and Legislative arms of government are essential partners in the fulfillment of their mutually aligned goal of improving the lives of the Nigerian people.

This was even as the Senate President said that though the legislature would continue to maintain the good working relations with the executive, but that it would not tolerate insubordination from any of the appointees of the President.

“The National Assembly will take exception to any attitude or disposition that is not in support of the harmony in the relationship between the two arms of government.

Senator Ahmed Lawan said that the National Assembly will continue to ensure that the administration works for Nigerians, and that it try to enhance the relationship between the Executive and the Legislature to commit by working together.

“Both the Legislature and the Executive must at all times work in the interest of the people of this country. We cannot afford not to do this because essentially, government is for people to have service and the essence of this particular visit is to ensure that the Legislature, the National Assembly and the Executive arm of government, led by Mr. President, continue to work together to ensure that the relationship that we have, which has been working for this administration to deliver services to Nigerians is sustained.

“I believe the outcome of this meeting is going to improve the relationship between the two arms of government. I imagine that at the end of the day, the trajectory of ensuring very good and purposeful operational way of doing things between the two arms will continue.

“Mr. President is in full support of our position that this relationship must be sustained at all times for the benefit of the people of Nigeria.

“This National Assembly has been very supportive, very friendly with the Executive arm of government and there’s no doubt in my mind that the President has been quite supportive of the Legislature as well.”

He recalled that in the processing of the budget last year, the President made a very categorical statement that no minister at that time should travel out of Nigeria without going to the National Assembly to defend his or her budget.

According to the Senate President, the relationship between the current National Assembly and the Executive arm of government, especially the President, “is beyond one employee of the President.”