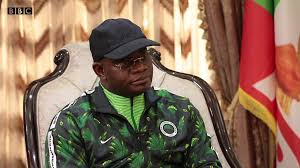 Umbrella body of Ebira people in Kogi State and Diaspora, Ebira Peoples Association (EPA) has appealed to Ebira people to maintain peace in the face of a query letter which the State Governor, Yahaya Bello issued to the Paramount king, Ohinoyi of Ebira land, Dr. Ado Ibrahim over the official visit of President Muhammadu Buhari to the area on December 29.
In a statement today, January 7, the President-General of the Association, Dr. Godwin Oyibo assured that consultations are ongoing to resolve the rift between the State Government and Ohinoyi on the issue, which arose as a result of the alleged failure of the Ohinoyi to turn up to receive the President.
Dr. Oyibo said in the statement: “As a people well-aware of the susceptibility of our socio-political atmosphere to disturbance, we must guide against any acts, utterances and postures that could potentially snowball or precipitate semblance of such, as recorded in Ebira land in our not-too distant past.”
Dr. Oyibo, on behalf of EPA, appealed to the State Ministry of Local Government and Chieftaincy Affairs and the Palace of the Ohinoyi of Ebiraland to resolve
whatever differences there may be, in the interest of peace and development of Ebiraland.
“We particularly appeal to His Excellency, Alhaji Yahaya Adoza Bello, whose preference for peace and security in Kogi State has earned him accolades from different quarters to re-examine this issue with a view to resolving the them amicably.
“As consultations and behind the scenes discussions are being intensified, we appeal to the public to avoid any public comments on the matter for now as peace is in the interest of everyone.”
He recalled the letter written by the Kogi State Ministry of Local Government and Chieftaincy Affairs dated 5th January, 2023 and signed by a certain Enimola A. Eniola, querying His Royal Majesty, Alhaji Dr. Ado Ibrahim CON for an alleged refusal to come out to welcome the President of the Federal Republic of Nigeria, Muhammadu Buhari GCFR, while he was in Okene for the commissioning of some legacy projects.
The President- General is worried that amidst the barrage of reactions trailing this development, as being circulated widely on
social media platforms, and consequent upon extensive consultations with some key stakeholders of the Ebira nation.

“I am compelled to call on all sons and daughters of Ebira to be circumspect in this seeming moment of perplexity.”
He reminded Ebira people the adage that says internal war amongst brothers and sisters (“irevu ini irehi”) does no one any good!