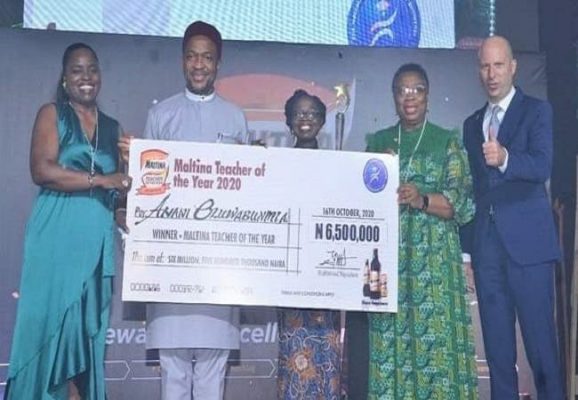 A female teacher with Concordia College, Jimeta, Yola, Adamawa State, Oluwabunmi Adani, has emerged the winner of this year’s Maltina Teacher of the Year (MTOY) award. She went away with N6.5 million.

She was announced the winner today, October 16 at the grand finale of the 2020 MTOY award ceremony held at Eko Hotel and Suites, Victoria Island, Lagos with the Minister of State for Education, Chukwuemeka Uwajiuba, Lagos State Commissioner for Education, Mrs. Folasade Adefisayo and Registrar of the Teachers’ Registration Council of Nigeria, Professor Josiah Ajiboye, among others in attendance. It was a low key event.

With her emergency as a current MTOY Award winner, Mrs Anani, who teaches the English language in her school becomes the sixth teacher to win the award which is free and open to all secondary school teachers nationwide

Messrs Collins Ezem and Olasunkanmi Opeifa, both from FCT schools won the 2019 and 2018 edition, respectively.

MTOY award, an annual event with this year’s edition sixth in the series, is an initiative of Nigerian Breweries Plc domiciled under its humanitarian arm- Felix Ohiwerei Education Trust Fund- to identify and showcase committed and hardworking secondary school teachers nationwide and consequently lift the education sector and the economy as a whole.