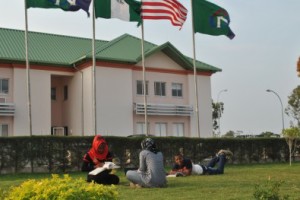 The American University of Nigeria-led Adamawa Peacemakers Initiative (AUN-API) has emerged as one of the winners of the annual prize for Inter-religious peace building from the London-based international Peace Direct organization.

The winners were announced at a ceremony in London and Washington, DC on Friday, December 9. The AUN-API won with its local community program that prevents conflicts between Christians and Muslims, and uses sports to prevent young people from joining terrorist groups.

According to the AUN’s Executive Director of Communications and Public Relations, Daniel C. Okereke in a statement, three winners emerged out of 244 entrants from 61 countries.

“The Tomorrow’s Peacebuilders Award includes a $10,000 grant to be used to further the recipients’ peace work. The AUN-API award is recognition for success working against conditions that created Boko Haram

“We are deeply honored by this recognition,” said Dr. Margee Ensign, president of the American University of Nigeria, which created API and provides overall direction.  “We’re grateful to all members of API, our interfaith clergy and other leaders of API, but especially Abdulahi Bello, who coordinates our Peace Through Sports program.”

According to one of the judges: “The jury was extremely impressed by AUN-API’s application and the way the group’s programs respond to the needs of the community and show both long-term sustainability and innovation in approach.”

Okereke’s statement said that one innovative aspect of the program is the Peace Through Sports, where young men and women join teams to play soccer, basketball and volleyball.

The statement quoted Dr. Ensign as saying: “the teams are unity teams-with Christian and Muslim young people playing together.  They learn to respect and to cooperate with one another, to appreciate and value beliefs different than their own.”

It said that one measure of program success is the number of young men who’ve been radicalized and joined the insurgency.  So far that number is zero.

According to Dr. Ensign: “Numerous participants told me that ‘It was either Boko Haram or you.’”  AUN also coordinates education programs and job training for young people in the sports program, as illiteracy and chronic unemployment are key contributors to the region’s instability.”

See also:  UniAbuja Frowns At JAMB For Being Associated With Admission Racket

In addition to the Peace Through Sports program, AUN-API conducts mediation sessions in communities, teaches conflict resolution techniques, provides literacy instruction for out of school children, and feeds thousands of people displaced by violence.

Dr. Ensign, who also chairs API, said that the AUN-API’s approach is scalable and replicable, and the key elements, which rely heavily on local knowledge and expertise, have already been replicated elsewhere, especially in places that are hard for government authorities and humanitarian organizations to reach.  Another advantage is that the community expertise at the heart of AUN-API is sustainable and can evolve in response to challenges inside and outside the community.

The longer-term vision, according to Dr. Ensign, is to spread the model throughout the wider region and country, wherever there is conflict, at-risk youth and the need for local empowerment.

AUN created the American University of Nigeria-Adamawa Peacemakers Initiative (AUN-API) in 2010, a peace initiative consisting of local leaders, traditional rulers and religious leaders, working to improve the quality of life of local and displaced Nigerians. Members of API identify vulnerable youth from their communities who are then educated and trained by AUN. The members of API are local leaders who are deeply involved with and embedded in their communities.

They have the best knowledge of which youth are the most vulnerable to violence and to groups like Boko Haram. Through locally led literacy and technology training, economic development, peace through sports programs and more, AUN and AUN-API are facilitating an environment for peace, promoting women’s empowerment and socioeconomic equality, engaging and preventing the radicalization of local youth and combatting violent extremism in Yola.