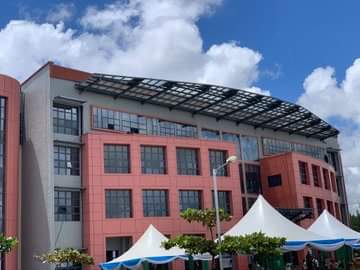 President Muhammadu Buhari has commissioned a multi-billion naira Post-Graduate Centre of Excellence built and equipped by the Central Bank of Nigeria at the Ahmadu Bello University (ABU), Zaria, Kaduna State.
Speaking today, August 22 before he unveiled the commemorative plaque, in a symbolic opening, President Buhari commended the Central Bank of Nigeria (CBN) for supporting the Federal Government’s investments in the educational sector as well as other keys areas of the economy which are tied to overall national development.
He advised the Bank to sustain such funding support for research and overall economic development.
This was as the CBN Governor, Godwin Emefiele said the Bank’s involvement in the funding and infrastructural support in the educational sector was borne out of the conviction that an educated workforce played a critical role in the advancement of the Nigerian economy and the society in general.
He said that the Bank’s analysis of the factors responsible for the growth of successful economies indicated that investment in education played a prominent role in driving innovation and growth in advanced and emerging economies, while also contributing to significant reductions in inequality.
He said that the CBN, being a knowledge-driven organization, had to ensure the sustenance of improvements in institutions of higher learning across the country.
Emefiele said that the Centre of Excellence project was designed to accommodate the Central Bank of Nigeria Collaborative Postgraduate Programme (CBN-CPP), which he described as a child of necessity in the Bank’s intervention programme in the educational sub-sector.
He explained that the project was conceived to produce a critical mass of skilled professionals that will be able to apply their knowledge towards supporting growth and continued innovation in our nation’s financial sector and the economy in general.
“This was against the recognition that the dearth of skilled manpower constituted a binding constraint towards making Nigeria the number one hub for economic activity in Africa.”
He said that the three first generation federal universities in the country across the six geo-political zones (Ahmadu Bello University (ABU), Zaria, University of Ibadan (UI), Ibadan and the University of Nigeria (UNN), Nsukka) have been selected under the first phase of the intervention programme.
He added that the programme was later expanded to cover six other tertiary institutions across Nigeria, which are nearing completion.
According to Emefiele, the project is mainly to ensure that students at post-graduate levels in Economics, Accounting, Banking and Finance, Business Administration and Statistics study in a serene environment that would stimulate effective learning with a view to building human capacity for the financial services sub-sector.
The apex bank boss stressed that the bank had taken steps to ensure that the investment in the special education yields considerable benefits.
He explained that the curricula for the target disciplines had been reviewed and harmonized across board to ensure that students are provided with the optimum level of knowledge relative to their peers in other parts of the globe.
“We believe that the Centres of Excellence will help support the government’s efforts towards reducing the incidence of brain drain, and curtail the huge foreign exchange being spent on school fees for Nigerians studying in other countries.”
Emefiele said that the three Centres of Excellence in Zaria, Enugu and Ibadan will commence operation in October 2019 and called on the universities to take maximum advantage of the world class facilities provided by the Bank to challenge their counterparts in London, New York and Dubai in the provision of training programmes in banking and finance-related disciplines for the global business community
He expressed appreciation to the  stakeholders, including the Federal Ministry of Education, National Universities Commission (NUC), the Ahmadu Bello University, Zaria, and the contractor, Messrs Afdin Nigeria Limited, for their support in completing the project.
The Post-Graduate School project is made up of a Faculty building and a block of rooms, as well as a 544-seater auditorium, four lecture and four tutorial rooms, traditional and e-libraries, and a telepresence room.
Emefiele used the opportunity to announce that the apex bank will subsequently provide funding support for the health sector in the country through the establishment of six diagnostic centres across the geo-political zones of the country.
He said that the decision of the bank to support the health sector is based on the realization that education and health formed the bedrock of development in any society.