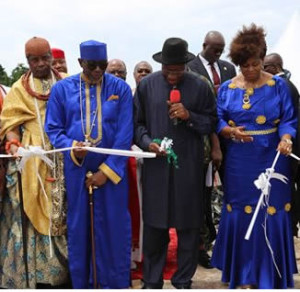 President Goodluck Jonathan has said that conventional government universities are weak in discipline and high moral values. “universities owned by religious bodies have discipline and moral education. This is quite weak in terms of conventional universities owned by government.
“These universities owned by religious bodies, we have seen high degree of discipline more on the academic staff.
“You cannot be in the university here and you talk about sexual harassment; that will not exist here because there will be no space for it.”
President who spoke on Tuesday at the ground breaking opening ceremony of the Eagle Heights University in Omadina community in Warri, Delta State, emphasized that since private universities, especially the ones owned by religious bodies also employ non conventional method in their curricula, including moral training, it is certain that there would be little or no irregularities and vices recorded by both the lecturers and students in such environments.
The university was established by President of the
Christian Association of Nigeria (CAN), Pastor Ayo Oritsejafor.
The President said that his government is quite passionate about universities being built by the private sector investors, especially religious bodies as they uphold high standard of discipline.
“Without the private sector coming in to assist, we cannot provide enough spaces for our children. That is why government is quite passionate about universities being built by the private sector, especially religious bodies because one advantage is that
Earlier, the Delta State Governor, Emmanuel Uduaghan had announced that over 150 billion naira has been sunk into road projects from Omadino to Gbaramatu and Escravos, adding that the Niger Delta Development Commission project is on expansion of roads in the area that is now referred to as the educational hub of the country.
The governor who thanked President Jonathan for personally undertaking the ground breaking exercise, pledged to continue to partner with the private sector in educational development as the fall out in education is always unimaginable.
The CAN President and the general overseer of the Word of Faith Bible Church and initiator of Eagle Heights University project, Ayo Oritsejafor had in his welcome address emphasized that the university is being built on three bold pillars.
Oritsejafor listed the bold pillars to include leadership, entrepreneurship development and theology, saying that those pillars differentiate the university from other conventional institutions.