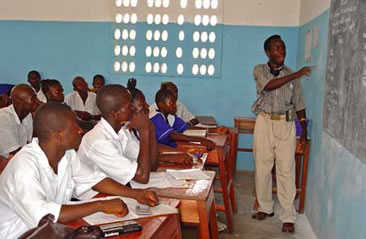 Leadership of the Nigerian Union of Teachers (NUT) in the Federal Capital Territory (FCT), Abuja, has called on members to return to duty immediately from the five-day warning strike which began today, November 18.

The Union called off the strike against the background of the assurance by the Minister of the Territory, Malam Muhammad Musa Bello that their promotion Arrears, which is one of the issues in contention, would be paid to them in December.

At a meeting today, November 18, with the leadership of the aggrieved teachers, the Minister said that the Permanent Secretary in the ministry had assured that after the payment of the arrears for 2016 had been effected, the ones for 2017 have been scheduled for payment between November and December of 2021.

This was even as the FCT Commissioner of Police, Babaji Sunday; State Director of the DSS, Ado Muazu and the State Commandant of the NSCDC, Dr. Peter Maigari gave assurance that necessary measures have been taken to improve the security situation in schools.

The teachers embarked on a 5-day warning strike to press home demands for enhanced security in schools and payment of arrears of promotion benefits for teachers.

Meanwhile, after the meeting, the NUT Chairman, Comrade Stephen Knabayi said that the Union appreciated the efforts of the security agencies and assurances from the FCT Minister that all efforts will be made to protect the lives and properties of teachers and students within the Territory

He expressed the appreciation of the union to the Minister for the pronouncement on the payment of promotion arrears of 2017 and 2018 before the end of the year.

The NUT chairman said: “from this meeting and from all the resolutions, we will go back (to work) without waste of time.”

He appealed to the Minister to intervene in the payment of arrears of LEA teachers under the administration of the Area Councils.