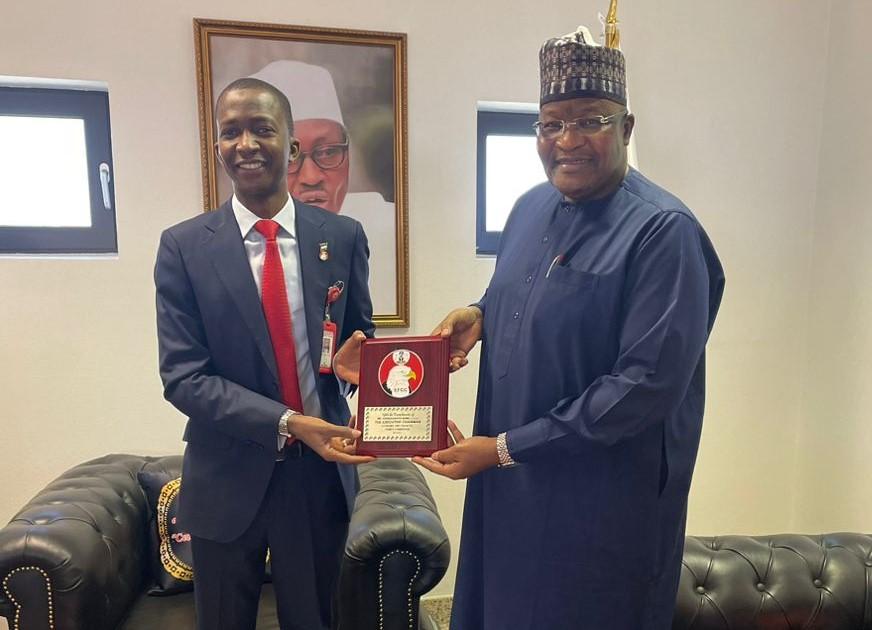 The Economic and Financial Crimes Commission (EFCC) has acknowledged the great anti-corruption roles which the Executive Vice Chairman and Chief Executive Officer of the Nigerian Communications Commission (NCC), Professor Umar Garba Danbatta has been playing, and has, therefore, been made him Ambassador of the EFCC.

The chairman of the anti-corruption agency, Abdulrasheed Bawa, while presenting Professor Danbatta with an ambassadorial badge today, November 24, in Abuja, acknowledged that the NCC, under the leadership of the Professor, has been in the vanguard of promoting transparency and openness with the strengthening of its Anti-Corruption and Transparency Unit in line with the Independent Corrupt Practices and other Related Offences Commission (ICPC) Act.

In a statement, the NCC Director of Public Affairs, Reuben Mouka, recalled that the Independent Corrupt Practices and other related offences Commission (ICPC), had in 2020, similarly ranked the NCC above other departments and agencies of the Ministry of Communications and Digital Economy (MoCDE).

He said that the NCC topped the list among three other agencies under the ministry, which featured in the intra-ministerial agencies’ ranking in ethics compliance and institutional integrity with 81.15 per cent.

According to Mouka, the Commission led 24 other regulatory agencies to emerge as the most ethically-compliant parastatal among 25 different regulatory agencies assessed in the anti-graft agency’s Ethics Compliance and Integrity Scorecards (ECIS), 2020.

He said that in 2017, the Bureau of Public Service Reforms (BPSR) awarded the NCC the topmost Platinum recognition for its institutional work processes, courtesy of its robust business organizational structure, policies, and practices that facilitated effective and efficient service delivery.

“In arriving at this conclusion, the BPSR also listed accountabilities and responsibilities for setting Standardized Operating Procedure (SOP) manuals of the Commission’s 19 departments as some of the high points.

“In the same vein, the NCC’S Computer Security Incident Response Team (NCC-CSIRT) has been at the forefront of rolling out series of preventive measures in the country, helping in the process to curbing cyber-related crimes.

Bawa presented the badge to Danbatta yesterday in Abuja when the latter paid a courtesy visit to his office to deepen the synergy between the two agencies.