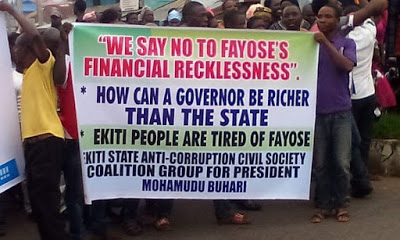 People of Ekiti state have risen against their governor, Ayo Fayose, asking him to resign over what they called governor’s failure to live up to expectations.
The people represented by a coalition of civil society organizations and the Conference of Nigeria Political Parties staged a protest in Ado Ekiti, the capital of Ekiti state.
The protesters were under the umbrella of “Be the Change Organization,” South West chapter.
The protesters, who converged on the popular Fajuyi Park, went through the Governor’s office gate and proceeded to Okeyinmi roundabout where their leaders addressed the public.
They carried placards with various inscriptions, including, “What happened to the airport fund,” “Fayose must go,” “Fayose is a disgrace,” “Stop wasting Ekiti money on olosho nights,” “We say no to Fayose’s financial recklessness,” and “We don’t want a criminal as governor.”
The protesters also chanted anti-Fayose songs to deride the governor, whom they accused of cornering the resources of the state.
The CNPP in its address read by the Publicity Secretary, Ayo Adelabu, called on the governor to come out and defend himself on the N4.7bn arms deal saga.
“We also implore him to come and explain to Ekiti people how he has spent six month allocation without the payment of Emiti workers which has grounded the state working force for the past one month.”
The CNPP called on the management of Zenith Bank to explain their role in the funding of Fayose’s 2014 election in the state.
The CNPP warned the governor to stop abusing President Muhammadu Buhari, who according to them, has been enjoying the full support of the majority of Ekiti people at large.
“CNPP strongly condemn Ekiti state legislators who have turned themselves to Political slaves in the hand of Fayose at the detriment of Ekiti people,” Adelabu said.
The CNPP asked the governor to explain the N2.3 billion loan he allegedly took from the bank, and advised the governor to immediately stop the flyover bridge project and caution all his political thugs against the attack on innocent people in the state.
The Executive Director of BCO, Mrs. Omotunde Fajuyi, said Ekiti people were embarrassed by the latest revelation of Fayose’s link with N4.7bn arms cash adding that all Nigerians must support any move to recover the people’s commonwealth from looters.
She said that Ekiti people were people of honour and integrity, even as she expressed dismay that Fayose’s conduct in power had brought shame and odium on all Ekitis both at home and abroad.
“We support President Buhari’s anti-corruption crusade, we have come out to protest looting of our money, corruption in government and scandals digging this government in Ekiti.
“Workers are dying at home, we want Fayose to explain what he has done with allocations he had so far collected because he had received more than N50bn as allocation since he came to power.
“Fayose claims to be a Christian, he must come out clean and give account to the people of Ekiti State and he must submit himself and all his aides and associates to anti-corruption agencies for investigation,” Fajuyi said.
The spokesperson for the artisans, Idowu Ayegbe, said, “We regret all the burden the governor has imposed on us in Ekiti in form of levies and taxes on our pupils. We are not happy with what the governor is doing including his attacks on the President.”
A youth leader, Adeoye Aribasoye, challenged Fayose to explain what he did with ecological funds and N9.6bn bailout funds he received from the Federal Government.
“We have a governor who is richer than the state, a governor who has over N4bn in his account he is the only one who can explain what he has done with all the funds he had received from federal authorities.
“He must explain the N2.4bn ecological funds because we don’t know what has happened to the money, he must answer for the revelations of Ekitigate.
“Pupils and students of public schools have been at home for over four weeks due to the strike embarked upon by civil servants and teachers,” he said.
Earlier on Thursday, the Executive Director of Zenith Bank, Sola Oladipo, led other top management officials to the governor to apologize to him on media report claiming that the bank had dissociated itself from the funding of his election.
When accosted by reporters who had laid an ambush for them if the bank actually made the denial, Oladipo who struggled to answer the question said only the spokesman of the bank could comment on the matter.
But commenting on the visit,  Fayose said, “They were begging me and that the matter should not go beyond this level. I asked them why did they go to the EFCC to tell lies.‎ Why did they have to lie that money came from the Office of the National Security Adviser?‎ If the money is for me why did they have to link with me what is not.”
Public workers in Ekiti State are owed five months salaries, while media reports said the Economic and Financial Crimes Commission (EFCC) had traced N4.7 billion from the Office of the National Security Adviser to Fayose’s account and two sons of a former Minister of State for Defence, Musiliu Obanikoro.
The governor, who denied the allegation, said that he had no financial transaction whatsoever with the ONSA under retired Colonel Sambo Dasuki and Obanikoro either by cash, cheque or electronic transfer. [myad]