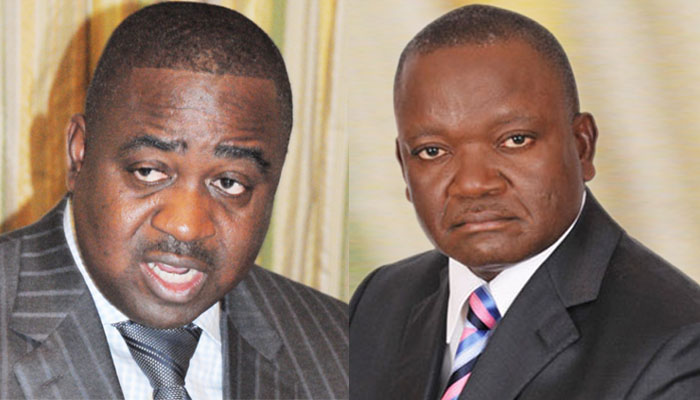 The immediate past governor of Benue State, Gabriel Suswam has described his successor, Samuel Ortom of lacking in wisdom as he has made it a cardinal duty to always blame him for everything that is happening in the state.

Suswam, in a long statement described Ortom’s mindset and approach as lacking in veracity and wisdom, considering that the people of the state are neither blind nor are they deaf that they cannot see and hear well enough to know if the governor is telling the truth in his endless accusations or merely trying to create a smoke-screen to divert the attention of the people from his own activities and performance so far in office.
“Is it really true that as Governor of Benue State, I, Gabriel Suswam, did arm youths in the state with dangerous weapons and encouraged them to perpetrate violence and commit crimes, as Ortom is accusing me? It is on record that I am not a violent person and I abhor violence in whatever guise, which Ortom knows.”

Full text of the statement, titled: “Benue State is today in a better shape than I met it,” goes thus:

My attention has been drawn to a statement credited to the Benue State Governor, Samuel Ortom, and published in some national dailies, where he alleged that I had “equipped” the youths in the state with arms to perpetrate violence during my tenure in office as governor of the state. The statement quotes Governor Ortom as alleging that his administration has recovered over 600 assorted weapons, which I had given to the youths from over 800 of them, who surrendered during the Amnesty Programme, and that I and my cohorts believed in violence and could take everything by force.

I like to state here clearly that nothing could be further from the truth than these unfortunate remarks from Ortom, which clearly bear the stamp of his well-known trade mark of leveling all manner of allegations against me, since his assumption of office, no matter how bizarre, absurd and preposterous such allegations might be. But, by now, I am aware it has become obvious to the people of Benue State and even beyond that throwing accusations at me has not only become a favourite pastime of Governor Ortom, it is also a cardinal lynch-pin of his administration’s policy drive.

However, this mindset and approach of my successor, Governor Ortom, is lacking in veracity and wisdom, considering that the people of the state are neither blind nor are they deaf that they cannot see and hear well enough to know if the governor is telling the truth in his endless accusations against me, or merely trying to create a smoke-screen to divert the attention of the people from his own activities and performance so far in office.
Is it really true that as Governor of Benue State, I, Gabriel Suswam, did arm youths in the state with dangerous weapons and encouraged them to perpetrate violence and commit crimes, as Ortom is accusing me? It is on record that I am not a violent person and I abhor violence in whatever guise, which Ortom knows.

A retrospective look at my political trajectory is very clear that no violent activity was perpetrated or could be traced to me unlike the records of my accusers and traducers as their kinsmen can attest to. Were security a sector one could score hundred per cent I would have scored that as governor, but that is a record that is globally being sought for.
On assumption of office as governor in 2007, I had moved decisively to turn around the state of insecurity, which pervaded the state as a fallout from politically motivated violence, which wreaked havoc on some parts of the state, particularly in Kwande, Tarka and Gwer-East Local Government areas, resulting from failed local council elections in those areas, where an indeterminate number of persons were killed and many others maimed for life.

In co-operation with the Nigeria Police and the Army, rapid response security units were set up in the state, such as ‘Operation Zenda’ and the ‘Red Scarf’ which my administration funded properly with the attendant result that throughout the eight years of my reign as governor, Benue State enjoyed the status of the most peaceful and secured state within the much troubled North-Central region of the country, a ‘peace and safety haven’ which witnessed rapid influx of people fleeing violence and unrest from other states in the country.

I also initiated the setting up of cross-border security outfits with neighboring states to curb the menace of inter-state criminal elements, particularly Nasarawa State, which though was under the rule of a governor from a different political party (CPC), co-operated with me to achieve results, which till date, no security operation in any part of the country has equaled the positive results from that exercise.

Regrettably, now that both Nasarawa and Benue States are in one political party – the ruling APC – such co-operation is not there. I will not be surprised if today, Ortom blames me for the present lack of co-operation and attendant poor result. I can, today, proudly flaunt as one of the achievements of my tenure in office the fact that Makurdi during that period earned the distinction of becoming the second fastest growing city in the whole of the West African sub-region of the African continent, but before my tenure, Makurdi was never on any global radar for positive reasons.

It should also be noted that when Fulani herdsmen and their militia descended on parts of the state visiting death and destruction on whole villages and communities, with a carefully thought out framework and strategy, my administration was able to curb the menace and the peace and security status of the state and its socio-economic stability and equilibrium were not adversely affected.

Such a feat was possible through a wide-embracing process of consultations and integration of stakeholders of the Benue project, most of whom were top-rated security experts and technocrats, under a number of technical committees, such as the Gen. (Rtd) John Atom Kpera-led committee, and also the involvement of a Civilian Task Force drawn from the locals that seamlessly complemented the efforts of security agencies, and together, we were able to harness effectively internal peace and security architecture.

I like to reiterate here that the issue of the peace and security of any state is too weighty and sensitive a matter to be thrown to the pedestrian walkway of petty politics, where the major considerations are rather dangerously trivial and only capable of undermining the deeper foundations of the prosperity and wellbeing of that state.
For Governor Ortom to seek to extend his endless and rather shallow blame game against me to the issues of security in the state, which flies in the face of reason and truth is an unfortunate and sad reflection of his lack of appreciation of the weight and responsibilities of the office of governor, and this is further suggestive of a basic lack of capacity on his part for such high office.

To buttress his apparent lack of preparedness for the task of being governor, Ortom even had no idea of the basic procedure for structuring his so-called Amnesty Programme, which he so loves to flaunt now, and it took the urgings of elder statesman, Alhaji Abubakar Tsav, for the governor to realise that he needed to put in place an Amnesty Committee, and this was well after the programme was purported to have gotten underway.
What this strongly suggests is a lack of consultation and wide enough involvement of Benue sons and daughters, who are knowledgeable in such matters and who could bring their weight of expertise and experience to bear on such a programme for the peace, security and overall good of the state.

Unfortunately, but predictably, Ortom’s Amnesty Programme today is the sham and failure that it is, with top officials of his administration being accused of involvement in crimes under the guise of the purported programme. For the very first time in the history of this state, a governor’s top security Aide has been assassinated and the accused culprits are members of the governor’s kitchen cabinet, yet he is apparently incapable of reining in his appointees.

The implication here is that Governor Ortom, as the supposed Chief Security Officer of the state, is not in control of the security apparatus of the state, and does not, therefore, have the authority over certain individuals and vested interests, and this reflects a bigger security menace than could be imagined in a modern society which is presumed to be operating on the principles of rule of law and order. Is it Gabriel Suswam, who is responsible for all of these? The answer is obvious to all.

As governor, I did my best possible within the limits of resources available to me to ensure the security of the lives and property of citizens of Benue State, and to guarantee for them, an atmosphere of peace within which to pursue their endeavours. I did not arm any individual or groups with weapons of any sort neither did I encourage violence or criminality in any form, both in my private and official capacity.
There is no record or proof anywhere to buttress these allegations of Governor Ortom that I did arm criminals with dangerous weapons. My regret now is that the honour, respect and clout my administration restored on the Benue man has been thrown to the gutters.

This is clearly yet another of the governor’s wild and baseless accusations against me, and the intention is yet all the more glaring, that he is desperately in need of something to divert the attention of the world away from non-performance and the serial scandals rocking his administration, from assassinations within his kitchen cabinet to, according to ICPC, embezzlement of workers’ salaries and loans, to lately, indictment of his regime by anti-corruption agencies, and the arrest and detention of government functionaries and his cohorts by the EFCC on charges of fraud.
Governor Ortom is evidently having the worst of times as the leader of a failing administration, one which is being daily exposed in the eyes of the world for its fraudulent character. He is, therefore, a desperate drowning man clutching at straws in the form of those unfounded allegations against me.

But I urge the governor to pull himself together and go back to basics. Being governor entails much more than just riding about in motorcades blowing sirens. It demands clear-headedness and an open mind targeted more towards the larger goal of the pursuit of the good of the majority of the people. No governor can succeed in office by being a mere stooge and a willing pawn in the hand of some god-father, who has no ambition in life other than to lord it over fickle-minded people and imagine himself a mini-god.

I left Benue State in a much better state of peace and security than I met it, and it is my advice to Governor Ortom to strive with all the resources at his disposal to improve on my legacy. This is the only way government will always derive its legitimacy – to improve on the existing standards at any given point in time, and by so doing ensure the continual progress and development of society.
On a last note, performance is needed to endear you to the people; blame-game can only buy you time. Once more, Ortom, roll up your sleeves and go to work. [myad]