Home NEWS Fani-Kayode Asks Buhari To Apologise For Women That Were Allegedly Beating Up... 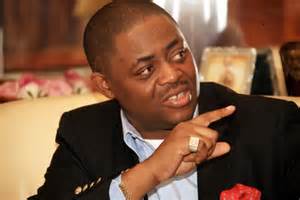 Director of media and publicity for the Peoples Democratic Party (PDP) Presidential Campaign Organisation, Femi Fani-Kayode has demanded an apology from the Presidential candidate of opposition All Progressives Congress (APC), General Muhammadu Buhari who is now the United Kingdom (UK), for the alleged beating of widows in Owerri, capital of Imo state by members of APC.
Fani-Kayode, at a news conference in Abuja today, asked General Buhari and the Imo State Governor, Owelle Rochas Okorocha, to show remorse and condemn the barbaric act by the officials and agents of the Imo State Government who superintended over the brutalisation of our harmless widows.
“Buhari and his friends in the APC must purge themselves of their obviously strong anti-women sentiments.  We know that the opposition party has a violent nature, but they should be able to draw the line by sparing women of their irresponsible and desperate fury.
“If Buhari and the APC refuse to tender an unreserved apology to the widows of Imo state within a matter of days, then we reserve the right to refer to them as a party of women beaters and haters who have no respect for the female gender and whose desire and intention is to enslave, brutalise and torment our women.
“The truth is that only cowards, bullies and scallywags would unleash a group of violent and dangerous armed thugs against a group of defenceless, harmless and innocent widows.”
Fani-Kayode narrated how the PDP women were, on February 10, brutalised in Owerri by agents of the Imo State Government in the course of their peaceful assembly to protest and pray for the women folks in the state against sudden widowhood.
According to him, the peaceful solidarity protest embarked upon by the Imo Widows Association, Jesus Triumphant Widows Association and Amuzi widows Association, etc., was in support of one of their own and current Minister of State for Education, Professor (Mrs) Viola Onwuliri, who is our committed party leader in Imo State.
He said that the women, in their thousands, all dressed in black had converged on the Roundabout, about three kilometers away from Government House, Owerri, as early as 8 am singing solidarity songs in support of President Jonathan and Professor Viola Onwuliri.
“Sadly, news of the march that was organised by the widows in support of President Jonathan was not received very well by the governor and the authorities in Imo state. Instead of protecting the widows and affording them their full constitutional rights, including the right to assemble, march and protest, well-armed hired thugs, who emerged from inside Government House, unleashed extreme violence on the harmless women in a despicable and frightful manner.
“Consequently they inflicted life-threatening and severe injuries on a large number of the widows.
They were brutal, callous and unrelenting and they refused to exercise any restraint as they unleashed the most barbaric form of violence and fury on the helpless widows. Many of the women were badly wounded and still remain in the hospital.  Others were traumatised and brutalised. Despite their screams, pleas and tears, the perpetrators refused to stop inflicting violence on them and instead they increased the brutality and fury of the attack.
“Some of the women were abducted and taken to Government House where they were further manhandled and abused.
An NTA cameraman, Mr Etuk Henric, whilst he was filming the horrendous encounter, was viciously and brutally stabbed in the attack by the agents of the Imo State Government and he was left for dead. He was filming the whole incident but his camera was seized from him and the tape was destroyed. He is now recuperating at the Federal Medical Centre in Owerri.
“The PDP Presidential Campaign Organisation is concerned that the APC government in Imo State would deploy its officials (including the Commissioner of Information, Chief Chidi Ibeh  and the Commissioner for Youths and Sports, Mr Kenneth Emelu), the Nneoma Women leader, Mrs Getrude Oduka, Youth Leader, Mr Jeff Nwaoha and SSA Youth, Mr Samuel Godstime, as well as hired thugs to brutalise our women.  This is all the more so given the fact that these women are widows.  Does the Governor of Imo State, Owelle Rochas Okorocha, have no respect for women? Does he not fear God?” [myad]