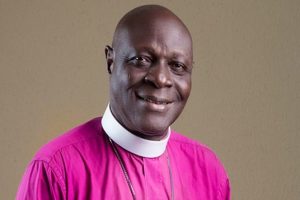 Former Governor of Ekiti State, Ayodele Fayose has advised the Anglican Bishop of Ekiti Diocese, Rt Reverend Christopher Omotunde, who criticized his regime to remove the cassock and mount the soap box so that the whole world would  know that he has joined  politics.

In a statement by his Chief Press Secretary, Idowu Adelusi, Fayose said that the Anglican Bishop, who said that his tenure was a waste and non-beneficial to Ekiti people, is blind and cannot see the physical transformation of Ekiti.

“Even the blind feels the good works of Fayose and perhaps Bishop Omotunde and the likes need to change their eye glasses to see well.

“Our fathers have a saying that it is disheartening when one hears a statement of gullibility from a place where one expects to hear the words of wisdom.

“The records of the Fayose administration are there for all to see. It organised an Education Summit that led to great improvement in education in the state. Ekiti came first back-to-back in NECO exams and we also did well in WAEC. These are public institutions and the records are there for Omotunde to peruse.

“The Fayose administration built the first flyover in the state and it passes besides Omotunde’s church. One wonders if the bishop closes his eyes whenever he drives or passes through that place. If he does not, we pray that God opens his spiritual eyes.

“The Fayose government built a new high court complex, a new Governor’s Office, a new Oja’ba Market; dualised roads in Ise, Emure, Ikole, Omuo, Ijero, Efon, among others. It also dualized the Ado-Ikere road, built many roads in Ado itself such as Petim-Afao Road and Dehead-Police Headquarters Road. May be the bishop does not pass through these roads!

“Accreditation for various courses in EKSU, School of Nursing, and College of Health Technology was pursued and achieved by the administration. We can go on and list many other achievements in agriculture, health, social welfare and other sectors.

“Yearly, the Fayose administrstion recognised hard-working teachers and civil servants with car prizes and other gifts. Within four years, it was promotion galore for civil servants. Civil servants and teachers will not agree with the untenable and jaundiced position of Omotunde.

“The Ekiti people who Fayose served for almost eight years know that his time was a great blessing to them, which is why they call him the architect of modern Ekiti. “Bishop Omotunde should remove his priest’s garment and mount the soap box if he is minded to be this politically partisan.”

“He said Fayose’s  opposition to Buhari administration did not allow Ekiti to benefit anything from the centre.

“Assuming that was the case, it only confirmed President Muhammadu Buhari as an autocrat who must not be criticised, and not a democrat who should take criticisms in his stride.

“We make bold to say that Ekiti under Fayose and PDP has witnessed more economic and physical development in the last four years when compared to neighbouring APC-controlled states which have openly venerated President Buhari as their god-father.

“What has Ondo, Osun, Oyo, Ogun benefitted from the Federal Government? What has even Lagos, where the APC national leader comes from, benefitted?

“In terms of peace and security, Ekiti under Fayose was peaceful; it was secured from herdsmen attacks, assassinations, and armed robbery opreations. These and politically-motivated killings have returned in full swing under Fayemi/APC.”