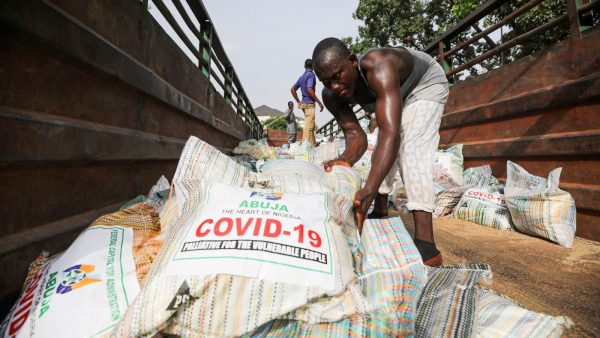 Bulk purchase of food commodities to distribute as Covid-19 palliatives is one of the factors responsible for the observed higher costs in the country, the National Food Security Council has said.

But it is confident that the situation will change as harvest season has begun and more commodities are arriving at the markets.

Governor of Jigawa state, Abubakar Badaru, who represents the North West in the council, made the observation during the council’s briefing after a meeting at the presidential villa, Abuja on Tuesday.

He pointed out that the Coalition Against Covid-19 (CACOVID), the federal and state governments were all involved in the bulk purchase of food items to distribute as coronavirus palliatives leading to increased costs.

“Prices started dropping at the local markets. It has to be bought, it has to be transported. If you have a exiting stock you will not lose money and drop the price. They will wait until they have exhausted the stock or there is a lot of the produce in the market, then they will be forced to drop the prices.

“So, the crops have started coming up, getting cheaper. It’s being transported and it takes time, depending on how fast the stocks are and how fast the traders are bringing the cheaper stock into the market before you will see that final drop.

“I’m sure if you go out now, you will see the drop. But I’m worried about people talking about expensive food, this is a cycle. For all of us that understand farming cycle, we know that May, June, July always produce, food get expensive because all the stock have started going down.

“And even the farmers that keep some to consume have probably exhausted and have to go to the market and buy. So, the demand is becoming higher.

“And this is also exacerbated because there is bulk buying.  CACOVID, states bought a lot to distribute as palliatives; federal government is also buying. All are buying at the same time at the same market, and you know when there is chunk of demand at the same time, things will naturally go up and that brings about the hike in price and coupled with the fact that it is an off-season period.

“An off-season period met with this huge demand certainly, price will go up. We have started seeing them going further down. It takes little time to translate into cheaper prices and in retail stores.”

In his explanation, the Vice Chairman of the Council and Governor of Kebbi state, Atiku Bagudu, reiterated that good prices are coming down judging by the data obtained and made available to him.

“Yes, I said food prices for crops has started coming down. That was from data collated and made available to me in my state and from a pre-meeting with all the commodity association: farmer groups prior to the National Food Security Council meeting.

“In the last one week, I have been going round my state in the last one week and have seen further drops in prices and it makes sense and is self explanatory. Harvest is coming in, harvests of millets, maize and of rice.

“Yes, we had a lot of devastating floods that affected the rice crop but again, there is upland rice that is being harvested that has not been affected by flood.

“The CACOVID was buying food items for the coronavirus pandemic response in bulk at a peak of the beginning of the season, at a time when demands are not high. So, it contributed to the high cost.

“The global lockdown also contributed because of lack of movement of food items. But now, harvests are coming in and it is good.

“Yes, there are some states that experienced huge draught but that has been overcome by the food coming from elsewhere.”

Bagudu assured that despite the flood disasters in parts of the country this year, which he said was worst that previous ones, there will it be food crisis.

He maintained: “Is there going to be good crisis? No, by God’s grace. Yes, flooding is devastating. Unfortunately, that is part of life. We have a good eco-system where immediately after flooding we can plant again.

“In fact the farmers are more confident because the risk of flooding has reduced.

So, what is important is for us to mobilize and ensure we time properly and is part of the reason Mr. President has been working very hard because that is what bothers him most, how to deliver to Nigerians.

“That is why since last week and a week earlier, the challenge has been ‘come up with how we can intervene so that farmers, fishermen and those in husbandry can resume economic activities as quickly as possible.’

“That is part of what we resumed today and that experienced will certainly come to play in this model.”

The governor also disclosed that President Muhammadu Buhari has ordered the reduction of the cost of fertilizer from N5,500 to N5,000 per bag.

Bagudu informed that production of the commodity has normalized in the country following the reopening of Indorama plant in Rivers state, which was closed because of Covid-19 related deaths.