Home NEWS Flood Destroys 5,000 Houses, Farms, Others Worth About N10 Billion In Kwara... 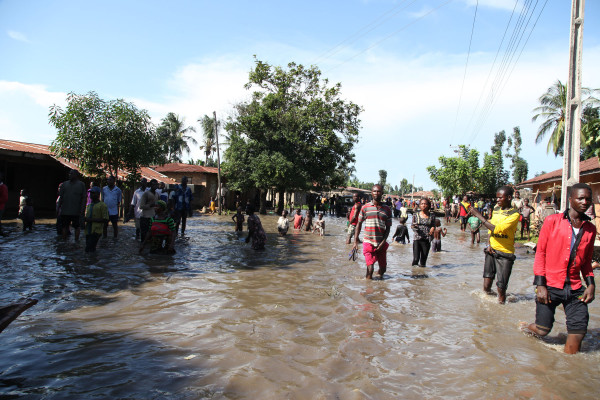 Kwara State Governor, AbdulRahman AbdulRazaq has lamented that a huge rainstorm has destroyed about 5,000 houses, farms and other structures in the State capital.

The governor, who spoke to newsmen shortly after an audience with President Muhammadu Buhari at the presidential villa Abuja, today, September 23, said

that the losses were in the neighborhood of  N5 to N10 billion.

“we have about 5,000 houses and thousands of hectares of farmland are under water. Close to about 10,000 to 15,000 people are already displaced so far. So, it’s straining the State’s economy. That is why we need virtual aid.”

He said that the saving grace so far is that the state is doing two cycles of rice farming in the area affected, adding: “We are hoping to do three cycles. Yes, there is huge impact. We are expecting bumper harvest this season, especially with Federal Government’s intervention in the agricultural sector. But unfortunately, we are going to lose this harvest and we hope we will be able to gain ground.

“We also thank Federal Government as they gave 10,000 Hectares Irrigation Scheme to boost our dry season farming. That project is on course now.”

Governor Abdulrazak said that the first line of assistance to the affected people the provision of is blankets, buckets, food, roofing sheets, and building materials.

“After that come things like fertilizers, pesticides, and seedlings to help them recover.

According to him, President Buhari has been very proactive, saying that the Federal Government is coming in to assist the State.

“The new General Manager (GM) at National Emergence Agency (NEMA) is also coming to Kwara to see the situation for himself. Already, NEMA is on ground in Kwara. He promised that the cycle will be shorter this time around. Before, after flooding, it will take up to six months before the aid comes in. But he has promised that things have been turned around at NEMA and they will act promptly. I believe him because he is an ex-Airforce officer.  It will be regimented.”