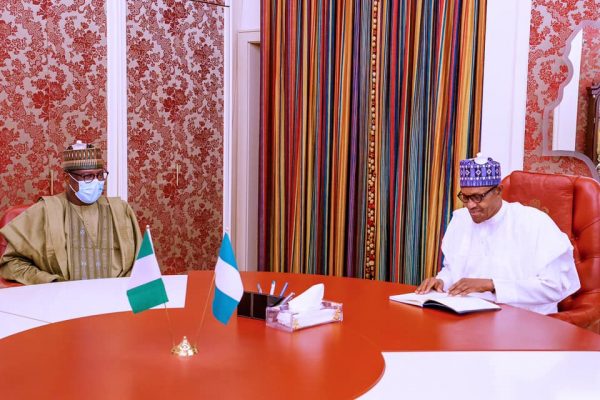 “At the moment, we are going through hell in Niger State. So I believe something will be done.”
These were the lamentations of the Governor of Niger State, Abubakar Bello, when he spoke to newsmen today, October 2, after an audience with President Muhammadu Buhari at the presidential villa, Abuja.
“At the moment, we have over 150 communities under water in Niger State, thousands of hectares of land have been displaced by flood. Major investments like the Sunti sugar is completely under water. They have lost over 2,500 hacters of Sugar Cane Plantation. And vast majority of the facility itself is under water.”
Governor Abubakar stressed that at the moment, the state is facing difficult times because the rains are quite heavy, saying that most sections of the road have failed completely “and there is need to have some quick intervention to ease the difficulties being experienced by motorists in highways.
He recalled that about two weeks ago he had a meeting, chaired by the Chief of Staff, with the Minister of Works, the GMD of the NNPC, the Director-General of Department of State Service and the Inspector General of Police with regard to the closure of Minna/Bida road.
“We were forced to close Mina/Bida road because the contractor on site had complained that the work in progress was very slow as a result of heavy movement of trucks on that road. As you are aware that road was built for light vehicles, so we were forced to shut down Minna/Bida road.
“Eventually, we had to open it so that we don’t create hardship to other parts of the country especially the Northern states. But at the moment as it today, we have two failed sections of Minna/Bida road and one failed section of Minna/Tekena road which has brought about the complete blockage of that road.
“So, something needs to be done immediately to provide for alternative route between South West and Northern parts of the states. We have a major trunk ‘A’ one road which is the Jabba-Mokwa-Kagara-Tegna-Pandogri-Kaduna road.
“I hope attention should be given to that road so that we divert most of the trailers to that road. There is also an alternative route which is the Mokwa-Bida-Lapai-Lambata road. That will also provide alternative to Minna-Bida road.
“So overall, that has been the main point of our discussion. We touched on flood briefly. I believe in the next few weeks, we may have some reliefs when it comes to flood.”
Governor Abubakar prayed that the state would able to get some quick intervention from the Federal Government so that his government would support the local farmers that have lost their livelihood due to floods.