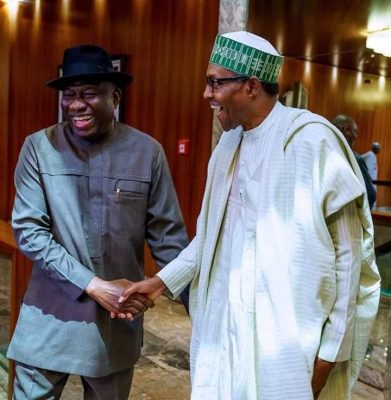 President Muhammadu Buhari has affirmed that former President, Dr. Goodluck Ebele Jonathan, is a model in good leadership from who many should learn.
“The former President’s profile should remind those in position and all aspiring leaders that serving the country and humanity requires sacrifice, and ultimately placing the interest of others above personal gains.”
President Buhari, in a statement today, November 16 by his spokesman, Femi Adesina, to congratulate Jonathan on his 64th birthday anniversary, November 17, 2021, acknowledged that the former President served the country and worked “for the peace and advancement of democracy on the African continent.
“Dr. Jonathan continues to expand the boundaries of leadership, teaching many in the country the power of focus, consistency and diligence, having served as Deputy Governor, Governor, Vice President, President, African Union Envoy and now, Chairman of the International Summit Council for Peace Africa (ISCP-Africa).
“ISCP-Africa is an association of incumbent and former heads of state and their deputies, established in 2019 by the Universal Peace Federation, an organization in general consultative status with the United Nations (UN).”
President Buhari said that as Dr. Jonathan turns 64, he prays that Almighty God will continue to sustain him and his family in good health and all round well being.