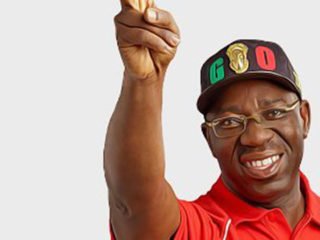 The governor gave the commendation during a thanksgiving mass to mark the appointment of Aghughu as the Auditor General of the Federation, at St. Anthony Catholic Church, Ewatto in Esan South East Local Government Area of Edo State.

Obaseki said: “I am going to thank President Buhari for considering merit above everything else. He has certain values that earned him the job; honesty, hard work and diligence. My advice is that he should continue to maintain these values.

“I am very proud that we have produced the Auditor General of the Federation. This is the doing of the Lord because he has been applying for this position since 2018 and is more than qualified but the Lord in his own time has made it possible. Aghughu achieved this position not through any godfather but through hard work; I am a witness to it.”

Earlier, Bishop of the Catholic Diocese, Most Rev. Dr. Donatus Ogun, noted:” We thank his Excellency, Governor Godwin Obaseki. This morning as we were coming in through Ewatto Road, in Esan South East, I saw that they were working on the road and I asked who is constructing it and they said it is the governor.

“We may have voted for different parties during the gubernatorial election, but let us work together for the success of our dear state.”

“As for the various security challenges that we are experiencing currently, let us not get tired of praying for our government. Whenever you pray for those in government, you are giving them an obligation to be better, ” he added.

On his part, the new Auditor General of the Federation, Adolphus Aghughu, pledged to be transparent and accountable to the people of Nigeria.

Other dignitaries at the thanksgiving service are Senator representing Edo South, Senator Matthew Urhoghide; Sen. Clifford Ordia, representing Edo Central and the Minister of State for Budget and National Planning, Clem Agba, among others.