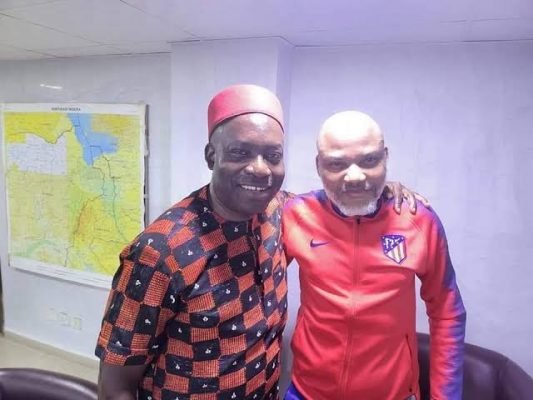 Anambra State governor, Charles Soludo, has appealed for the “unconditional” release of the leader of a proscribed group, Indigenous People of Biafra (IPOB), Nmandi Kanu, by the Federal government, saying he would stand as a surety for him.

Governor Soludo, who spoke at the kickoff of the campaigns of the All Progressives Grand Alliance (APGA), for this year’s general elections at Alex Ekwueme Square in Awka, the Anambra State capital, said that South East needs the detained IPOB leader at the table, for a “comprehensive, heart-to-heart conversation” about the future, security, and prosperity of the geopolitical zone.

“I now want to appeal, and demand of the Federal Government and our able president, led by President Buhari, that a critical person [is] required around that table for that conversation to be complete and for us to have an all-round approach to dealing with the issue of insecurity and discussing the future of the South-East.

“No one should be left behind; everybody should be there. If we cannot release him unconditionally as requested by the court judgements and so on, I now offer to be the surety. Release him to me. I will keep him. Release Nnamdi Kanu to me.

“I will keep him. I will provide him shelter and anytime that you need him, we will bring him to you. Give him to me; we will house him here in Awka. Let us release him and let us bring this insecurity in the South-East to an end,” the governor pleaded

Recall that Nnamdi Kanu had previously jumped bail before his extradition to Nigeria from Kenya.

He has been in the custody of the Department of State Service (DSS), since 2021 and is facing trial over alleged treasonable felony.