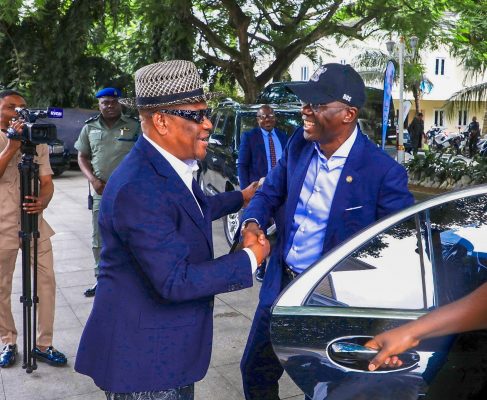 Rivers State Governor Nyesom Wike has donated the sum of N300 million to the Committee of Wives of Lagos State Officials (COWLSO), even as he said that the State Governor, Babajide Sanwo-Olu of the All Progressives Congress (APC) deserves a second term in office.

Governor Wike, a leader in the opposition Peoples Democratic Party (PDP), now at dagger drawn with the leadership of the party, spoke today, October 18, as the special guest of honour, at the 2022 Annual Conference of the COWLSO) which was held at the Eko Hotel and Suites, Lagos.

At the conference, themed: “Spring Forth, Stand Out,” Governor Wike said that Governor Sanwo-Olu’s performance in office has earned him a second term, Wike, commending the governor for giving women the opportunity to serve in various capacities in the state, especially in the Judiciary.

“By the grace of God, you will be a second-term governor. Lagos is doing better than other states in this country because Lagos has allowed women to participate in governance in various capacities. I am very happy to participate in this conference. I don’t play politics of ethnicity.

The Rivers state governor added: “So why would you not support such a government that is encouraging this? Look at the physical infrastructure in Lagos. What do you say? Lagos is the Center of Excellence.

“There are some people who will be here, instead of them making Lagos to continue to improve, they will bring the state down and that is not the case here. For me, I’m satisfied, it doesn’t matter the party’s difference.”