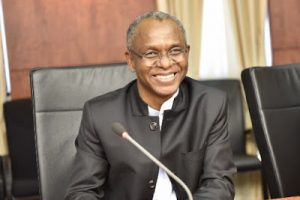 Kaduna State governor, Nasiru Ahmad el-Rufai is now a grandfather, announcing by himself, the arrival into the family of a new baby girl.

El-Rufai on his tweeter handle @elrufai today, Saturday, wrote: “Alhamdulillah. I am officially a grand-father! My daughter-Inlaw Kamilah Bello El-Rufai delivered a baby girl about 30 minutes ago. Baby, mother and my son Bello are doing well. Please put them all in your positive prayers. ~ Nasir El-Rufai.”

This was even as the chairman of the Peoples Democratic Party (PDP) in Kaduna state, Felix Hyat has accused governor el-Rufai of abandoning the state for the past 11 days without communicating to anyone about his whereabouts.

In a statement, the PDP chairman said that the governor has not been seen in public for over 1i days and there is no formal explanation from his aides about his whereabouts.

Felix Hyat, said: “for more than 11 days running, governor el-Rufai of Kaduna State has disappeared from public glare, without transmitting power to his deputy.”

e condemned the APC’s style of leadership in the state “which is without recourse to Constitutional provisions.

“We advise the APC- led Government to respect the tenets of our democracy so as to sustain the hard-earned democracy the PDP and other Nigerians fought to put in place for the betterment of a liberal society.” [myad]