Home FEATURES Governor Wike To Amaechi: Don’t Panic Over Probe If You Don’t Have... 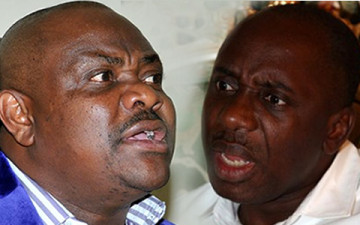 Governor Nyeson Wike of Rivers has asked his predecessor, former governor Rotimi Amaechi not to panic over the normal checks his government is carrying out on how the state was run under him.
Answering questions from newsmen after the 36 state governors had had a meeting with President Muhammadu Buhari at the Presidential Villa, Abuja, Wike said that he had no reason to witch-hunt the former governor.
“If you don’t have any skeleton in your cupboard you don’t need to be afraid of anything. What we are trying to do is just to keep the records straight; we are not witch hunting anybody. This is not the first time where you find the judicial commission of inquiry being set up by the last administration, three times. So who were they witching hunting then?”
Governor Wike said that he met two month unpaid workers’ salaries, for April and May and that his government is finding the way of paying such salaries.
“It is unbelievable that a state like Rivers should be owing salaries. That is where we found ourselves. That is the reality on ground.”
He said that as far as he knew, no one has indicted former governor Amaechi, emphasizing that what he intended to do is to look at certain records as to whether they are straight or not.
“But he said it is witch hunting. When he was there, he set up three judicial panels. So was he witch hunting any one by setting them up? He set up Kayode Eso reconciliation commission, Judgewill Panel, etc. Does it mean that all those panels were to witch hunt people?
Wike said that he is determined to build what he called “a new River State” and that he would take the state to the next level. [myad]