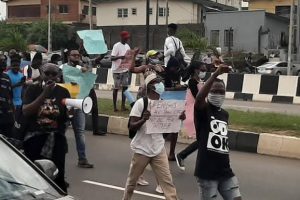 A group known as Buhari Media Organisation accused some political and religious leaders of fuelling the EndSARS protesters despite the fact that the government had acceded to their original demands.

It said in a statement by its Chairman, Niyi Akinsiju and Secretary, Cassidy Madueke, that the turn of events in some parts of the country is the outcome of their misguided support.

“We had quietly watched the antics of some influential members of the opposition Peoples Democratic Party (PDP) including former Vice President Atiku Abubakar and former Senate President Bukola Saraki on one hand, and religious leaders like Apostle Johnson Suleiman and Bishop David Oyedepo who have been giving tacit support to the protesters.

“This was even after President Muhammad Buhari had given his words on the disbandment of the Special Anti-Robbery Squad (SARS) and taken far-reaching steps to meet all the five original demands of what we agree were legitimate.

“Now that the protests have become volatile with clear cases of arson attacks on Police stations in some key cities, mob attacks on policemen and at least 2 jailbreaks aside from clashes between opposing groups, we are surprised that we have not seen them express the same energy they used to promote violence to call for calm.

“We make bold to say that these influential leaders of thought should have been playing a more statesmanlike role despite their political stance knowing how volatile such a protest without a clear exit plan could be.

“This was even at a time that the original advocate of EndSARS Segun Awosanya had made it clear that the issue had gone beyond calling for police reforms.

The group appealed to local and foreign funders of the EndSARS protests to desist from acts capable of creating more hardship for Nigerians.

” It is a matter of fact that the protesters’ strategy of blocking major highways has been preventing movement of goods and services as well as people engaging in economic activities.

“So it was clear that it would have some effects on the bottom line of individuals and corporate bodies especially in a place like Lagos where a large chunk of Nigeria’s VAT receipt comes from.

“And just before the state government imposed a 24-hour curfew in the state, some of the protesters had moved into the Murtala Mohammed International Airport in Lagos while others had plans to stop activities at the port.

” At the last count, the Nigerian economy has lost N700bn, according to the Lagos Chamber of Commerce and Industry (LCCI) which also believes that there was no reason for the EndSARS protests to continue based on the government’s response.

“So it was clear that what was meant as a legitimate protest against Police brutality had morphed into something targeted at creating anarchy and grinding an economy that has been badly hit by the twin impact of lower oil prices and Covid-19 pandemic.

The group urged Nigerians to trust President Buhari’s ability to effect the long-expected Police reforms and bequeath a modern Police Force for posterity which everyone would be proud of.