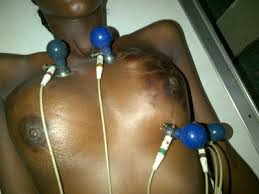 Founder of the Breast Without Spot (BWS), Initiative, an non-governmental organisation, Ms. Okoye, has said that Nigeria is loosing 26 women daily to cervical cancer even as she said it is killing more women world-wide now than HIV/AIDS, tuberculosis and malaria put together.
Okoye spoke today at the inauguration of a school-based cervical cancer vaccination awareness initiative in Lagos.
“We conducted a survey and discovered that cervical cancer is the second killer cancer among women and Nigeria is also the tenth in cervical cancer death worldwide,” she said.
“Forty-eight million women are at risk, 17, 550 women are diagnosed yearly, 9, 659 women die annually and 26 women on daily basis in Nigeria.
“This is alarming and most of the cases are rampant in the developing countries like Nigeria.
“It, therefore, requires a proactive political commitment to fight the scourge,” she said.
Ms. Okoye said that cervical cancer is 99 per cent preventable and prevention is necessary for the reduction and control of cancer burden in the country.
The radiologist urged government at all levels to improve and strengthen the healthcare system in terms of funding, infrastructure upgrade and training of medical personnel.
She also urged Nigerians to imbibe regular health check to prevent late detection of cancer cases and cancer mortality.
Also speaking, the senior registrar, Obstetrics and Gynaecology Department, Lagos State University Teaching Hospital, LASUTH, Joy Agbara, said it is unacceptable that many women still died when cervical cancer was preventable, treatable and curable.
Ms. Agbara said that lack of awareness, resources and low budgetary allocation to the health sector contribute to the country’s high rate of the disease burden.
She urged women to go for regular screening for early detection and prompt treatment.
“Cervical cancer has no particular symptoms but women should look out for signs such as pains around the cervix, painful intercourse, foul smelly discharge, weight loss and weakness.
“A lot of patients died due to lack of access to healthcare and high cost of cancer treatment,” she said.
In her remark, Funmilayo James, BWS National Coordinator, said the school-based vaccination initiative is being adopted to prevent cervical cancer in several countries.
Ms. James said the initiative involves parents and school owners or administrators to consent and sponsor the vaccination of girls between the age of nine and 13 as a primary prevention.
“The programme will start off in Lagos schools and as time goes on, we will spread it across the other states of the country,” she said.
The launch featured a media award where a News Agency of Nigeria, NAN, health reporter, Lucy Osuizigbo, emerged as Journalist Cancer Control Advocate of the year.
The other recipient of the award is Bukola