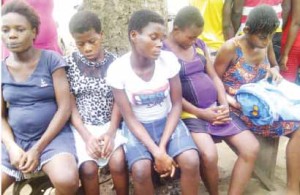 An estimated 36,000 Nigerian women are said to be dying in pregnancy or at child birth each year with about 5,500 of them being among teenage mothers. This shows that Nigeria accounts for about 13 percent of the global maternal death rates.

This is even as Jigawa state topped the list of teenage mothers with 78 percent of its girls between ages 15-19 in early marriage. Jigawa is closely followed by Katsina, Zamfara, Bauchi and Sokoto states.

These figures were revealed in the Demographic Health Survey 2013 which also noted that 70 percent of the maternal deaths in Nigeria are due to four conditions: haemorrhage, eclampsia, sepsis and abortion complications.

It disclosed that only 9.8 percent of Nigerian women use modern family planning methods , while 16.1 percent have an expressed unmet need for family planning.

“51 percent of pregnant women had at least four antenatal care visits…only 38 percent of the annual 6.6 million births in Nigeria were assisted by a skilled attendant,” it read.

Data made available by the United Nations Population Fund (UNFPA) however noted that over the last 20 years, Nigeria has made significant progress in reducing the maternal mortality ratio. It however added that Nigeria has to make concerted efforts to reach the Millennium Development Goal of 300 per 100,000 (or under 20,000 annual deaths) by 2015.

Nigeria also has about 260,000 neonatal deaths annually, 13 percent of which can be prevented with live saving interventions such as provision of required maternal health medicines and supplies.
On child marriage, it was revealed that Nigeria has one of the highest child marriage prevalence rates in the world. [myad]