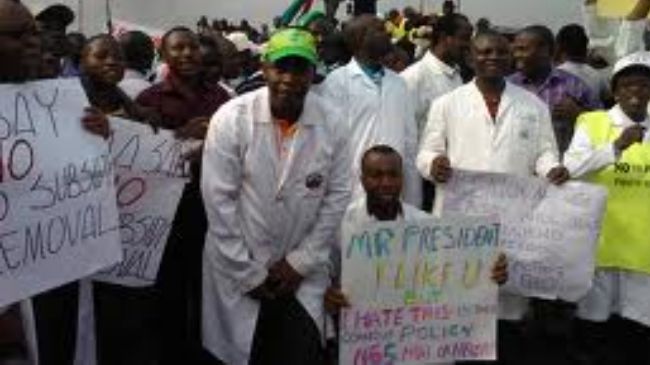 The Nigerian Medical Association (NMA) has lamented the rate at which medical workers exit Nigeria, saying that said over 2,000 of them go to developed countries every year.

According to the President of the Association, Dr. Francis Adedayo Faduyile, expressed worry at the increasing rate of brain drain in the medical sector believed that the present situation can be harnessed and used as an advantage to the country.

Dr. Francis Adedayo Faduyile, who spoke at the opening ceremony of the Annual General Conference/Delegates’ meeting of the Association in Abakaliki, Ebonyi State, said that the exodus trend gave rise to the theme of the meeting which is ‘Skill Repatriation in the Health Sector: Turning Nigeria’s brain drain to brain gain’.

The Association President said: “we believe that the situation can be turned to an advantage, hence the need to bring this to the front burner for discussion and proffer a way out to the country’s advantage.”

He advised Nigerian politicians to be more current on the necessary statistics and facts on the matter which has now become a trend rather than make indicting remarks.

“Without intent at generating further controversy on the matters arising from the unfortunate remark by a senior cabinet member of the Federal Republic of Nigeria who, incidentally or coincidentally, doubles as a senior member of the Medical Profession.

” it is our firm belief that this gathering would generate firm statistics and facts that possibly would be enough in convincing those policy makers at critical MDAs of government at all levels, including the Federal Ministry of Labour and Productivity who, perhaps, are yet to come to reality with the scientifically unambiguous deleterious aftermath of the worsening disparity between the health workforce in general and the population.

“Then, they can join us in the clarion call for action and be committed to instituting necessary actions,” Faduyile said.

Recall that the Minister of Labour and Employment, Mr Chris Ngige had said medical doctors were free to leave Nigeria as the country had enough practitioners.

“I’m Not Worried, We Have Surplus (Doctors), if we have a surplus, we export. I was taught Biology and Chemistry by Indian teachers in my secondary school days,”Ngige said

“They are surplus in their country. We have a surplus in the medical profession in our country. I can tell you this. It is my area, we have excess. We have enough, more than enough, quote me.”