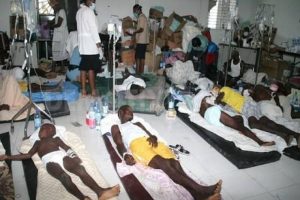 The Nigeria Centre for Disease Control has announced a total 65,145 suspected cases of cholera, including 2,141 deaths, representing a Case Fatality Rate of 3.3 percent reported from 23 states and the FCT, as of September 2, 2021.
The NCDC disclosed this on its Cholera Situation weekly epidemiological report pasted on its official website.
The News Agency of Nigeria (NAN) reports that there was a 62 percent decrease in the number of new suspected cases in week 33 (2,127) when compared with the 3,098 cases in week 32.
According to the report, Bauchi with 855 cases, Katsina with 396 cases and Kano’s 306 cases accounted for 73.2% of 2,127 suspected cases reported in week 34,
Others are Yobe (162), Zamfara (80), Niger (78), Borno (67), Sokoto (45), Kaduna (41), Gombe (21), FCT (18), Kebbi (17), Adamawa (15), Taraba (13), Nasarawa (10), Plateau (2) and Jigawa (1),”
It noted that the suspected cases were since the beginning of 2021, with children aged 5 – 14 years as the most affected age group for both male and female.
All the suspected cases, comprised 51 percent males and 49 percent females.
“23 states and the FCT have reported suspected cholera cases in 2021. These included: Benue, Delta, Zamfara, Gombe, Bayelsa, Kogi, Sokoto, Bauchi, Kano, Kaduna, Plateau, Kebbi, Cross River, Nasarawa, Niger, Jigawa, Yobe, Kwara, Adamawa, Enugu, Katsina, Borno, Taraba and the FCT.
“In the reporting week, 16 states plus the FCT reported 2,127 suspected cases – the NCDC said.
Out of the suspected cases, there were 32 Rapid Diagnoses Test (RDT), confirmed cases from Adamawa (11), Katsina (8), Kaduna (7), Borno (4), Taraba (1) and Yobe (1). There were 32 culture-confirmed cases from Yobe, (12), Adamawa (11), Katsina (8) and Borno (1).
The public health agency added that of the cases reported, there were 48 deaths from Bauchi (10), Kano (7), Katsina (6), Taraba (5), Zamfara (4), Sokoto (4), Borno (4), Niger (3), Nasarawa (2), Kebbi (1), Yobe (1) and Kaduna (1) states with a CFR of 2.3 percent.
“No new state reported cases in epi week 34. The national multi-sectoral EOC activated at level 02 continues to coordinate the national response Epi-Summary”, it stated.
It, however, said that the national multi-sectoral EOC activated at level 2 continues to coordinate the national response.
NAN reports that Cholera is a waterborne disease and the risk of transmission is higher where there was poor sanitation and disruption of clean water supply.
The wrong disposal of refuse and practices, such as open defecation, endanger the safety of water used for drinking and for personal use.
These lead to the spread of water-borne diseases such as cholera and without proper WASH, Nigeria remains at risk of cholera cases and deaths.
The long-term solution for cholera control lies in access to safe drinking water, maintenance of proper sanitation and hygiene.
Cholera is also preventable and treatable; however, it can be deadly when people who are infected do not access care immediately.