Home NEWS HEALTH Cure, Vaccines For Ebola Disease In The Making, May Be Ready Next... 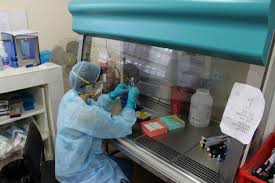 There is now a good tiding with a news filtering in that some companies in the United States of America are already getting closer to discovering drugs that can cure the deadly Ebola disease, even as some others are working on vaccines for same.
Information has it that one of the companies, known as Bavarian Nordic A/S, a Danish company has started developing its smallpox vaccine, Imvanex, for use as an anti-filovirus injection. The drug was found to be 100 percent protective against Ebola and Marburg in non-human primates.
The U.S. government awarded the company a $17.9 million contract in 2012. The injectable form of Imvanex is likely to enter Phase one clinical trials in the United States in 2015.
Another company, Biocryst Pharmaceuticals Inc, is believed to have developed a drug called BCX4430 which has gone through pre-clinical trials to treat Marburg, another dangerous disease similar to Ebola. Experts and analysts are said to have concluded that the drug can potentially cure Ebola.
This even as another company, Mapp Biopharmaceutical Inc, a California-based privately owned company has produced an anti-Ebola drug which was given to two Ebola-infected U.S aid workers that have since shown signs of improvement. Information said however that so far, the drug has only been tested in monkeys. Mapp was part of a consortium of 15 research outfits that in March won a five-year grant from the National Institutes of Health worth up to $28 million to find a treatment for Ebola
And yet another company, Siga Technologies Inc, a bio-defense drug developer is said to have produced an experimental drug, known as ST-383. The drug is meant to prevent the Ebola virus from entering host cells and effectively end Ebola’ replication cycle. The company says the drug is being tested on animals.
Other companies are as follows:
Tekmira Pharmaceuticals Corp, a Canadian drugmaker which FDA has allowed to resume testing its drug in people infected with Ebola, after blocking human tests last month. The FDA had halted the early-stage study following safety concerns among people taking the highest doses of the drug.
Medivector is also a privately held drugmaker, along with its Japanese partner, Fujifilm Holdings Corp. It is in talks with the FDA to submit an application to expand the use of its influenza drug, Favipiravir, as a treatment for Ebola.
Sarepta Therapeutics Inc is another company that has undertaken some human trials on its anti-Ebola drug, but lost government funding two years ago whereas Nanoviricides Inc company has said, last week that it would resume development of its anti-Ebola drug.
For vaccines, Glaxosmithkline PLC (GSK) is said to be co-developing a vaccine with the U.S. National Institute of Allergy and Infectious Diseases (NIAID). The vaccine is beleived to have shown promising results in primates.
The vaccine is due to enter early-stage human trials, pending U.S. Food and Drug Administration approval. GSK has said human testing should start this year. NIAID expects trials to begin as early as fall 2014.
It said that even if it is fast-tracked and works as well as hoped, the new vaccine could not be ready for widespread deployment before 2015.
There is also Johnson & Johnson:
The company’s Crucell unit is working with the U.S. NIAID to develop a vaccine, which should enter early-stage clinical testing in late-2015 or early-2016. The Crucell vaccine is designed to give additional protection against Marburg, another severe and highly fatal disease caused by a virus from the same family as Ebola.
Profectus Bioscience Inc;
The privately owned company has tested its vaccine in monkeys, with good results. A single intramuscular injection was found to protect all of the rhesus monkeys exposed to Ebola three weeks later. The company hopes to launch a human trial within 12 months.
So far, the Ebola epidemic in West Africa has killed nearly 1,000 people and has prompted the World Health Organization to declare an international health emergency.
No Ebola drugs or vaccines have entered mid-stage human trials, let alone been approved. The most advanced have been tested only in monkeys and a handful of humans. [myad]