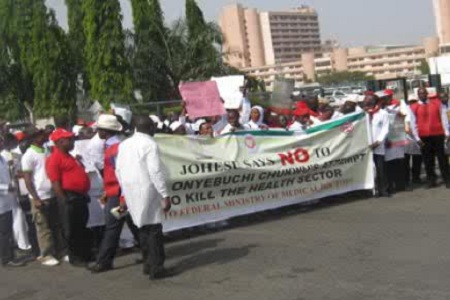 The National Industrial Court in Abuja is believed to have intervened in the face-off between the federal government and the Joint Health Sector Union (JOHESU) by taken over the negotiations via its Alternative Dispute Resolution (ADR) Centre.

Information reaching us indicated that the court in its ruling, ordered the union and government to nominate their representatives in the ADR process within 24 hours.

“The agreement reached at the ADR centre will be registered in the court as judgment binding on both parties. JOHESU is to initiate the process of allowing normalcy to return to hospitals within three days.”

The ruling of the court was made available today, Wednesday, to the News Agency of Nigeria (NAN) by the National Publicity Secretary of the Association of Medical Laboratory Scientists of Nigeria (AMLSN), Dr Casmir Ifeanyi, on Wednesday in Abuja.

The court had earlier on May 17, ordered the aggrieved members of JOHESU to suspend the protracted strike and resume duties across the nation within 24 hours.

The President of the court, Justice Babatunde Adejumo, gave the order after listening to the submissions of Okere Nnamdi, in an ex-parte motion filed by a non-governmental organisation.

The NGO, Incorporated Trustees of Kingdom Human Rights Foundation International, in the motion prayed the court to direct the workers to resume work and go back to negotiation table.

In his ruling, Adejumo ordered the Ministers of Health and Labour, among other respondents, to immediately set up a committee to address issues raised by labour.

The judge ordered that the parties should arrive at an acceptable and amicable solution in the interest of Nigerians who are bearing the brunt of the industrial action.

NAN recalls that the National Chairman of JOHESU, Josiah Biobelemoye, on May 28 in a statement, assured that the union would soon resolve the strike sequel to the intervention of the Senate President, Dr. Bukola Saraki.

JOHESU embarked on the strike on April 18, to press home its demands for improved healthcare facilities, upward adjustment of CONHESS salary scale, and employment of additional health professionals, among others.